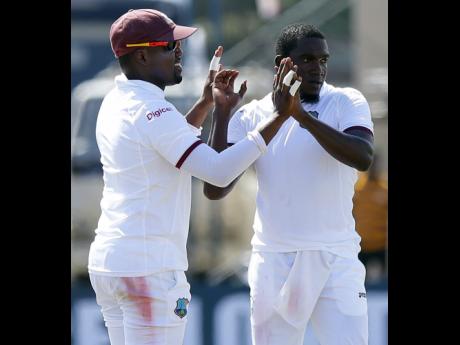 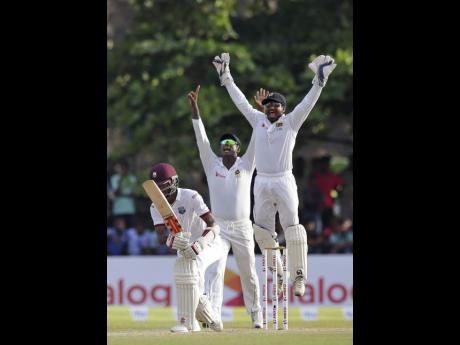 West Indies lost both their openers cheaply in the final hour to suffer a major setback after big centuries by Dimuth Karunaratne and Dinesh Chandimal had given Sri Lanka command of the opening Test here yesterday.

Facing a massive challenge after Sri Lanka piled up a massive 484 in their first innings, West Indies were further undermined by the quick departures of Kraigg Brathwaite (19) and Shai Hope (23) to the left-arm spin of Ragana Herath to close the second day at the Galle International Stadium tentatively placed on 66 for two.

The pair added 33 for the first wicket before Brathwaite missed an arm ball, was struck on the back leg and adjudged leg before wicket after just over 36 minutes at the crease. He had earlier had a similar decision overturned on review, on 14.

Hope, in only his fourth Test, played authoritatively for just over an hour and struck three fours but perished when Herath got one to drift past his forward defensive prod, and hit off-stump, about 20 minutes before the close.

Rocking on 49 for two, the Windies were steadied by left-hander Darren Bravo, unbeaten on 15, and Marlon Samuels, on seven not out, who safely navigated their way to the close.

Earlier, big centuries from Karunaratne (181) and Chandimal (151) laid the foundation for Sri Lanka's dominance after the hosts resumed the day on 250 for two.

The pair extended their overnight third-wicket stand of 149 to 238 before being separated, as Sri Lanka controlled the morning session to add 94 runs for the loss of just one wicket.

The left-handed Karunaratne, unbeaten on 135 overnight, posted a career-best knock, facing 354 balls in a shade over eight hours at the crease, and striking 16 fours and a six.

Chandimal, meanwhile, who was 72 not out at the start, completed his fifth Test century with an innings which included 16 fours and two sixes and lasted 298 balls and six and a half hours.

Captain Angelo Mathews chipped in with a breezy 48 off 65 deliveries, adding a further 86 for the fourth wicket with Chandimal.

Once Karunaratne fell before lunch, however, Sri Lanka declined to lose their last eight wickets for 145 runs.

Leg-spinner Devendra Bishoo finished with four for 143 from a marathon 40 overs, while fast bowler Jerome Taylor picked up two for 65.

Karunaratne extended his domination into day two, collecting boundaries on either side of the wicket off Taylor in the day's fifth over to pass 150 for the second time in Tests.

The left-hander was largely untroubled and looked to be marching towards a maiden double hundred when he tugged an innocuous short delivery from part-time off-spinner Samuels back to the bowler to fall three overs before lunch.

Chandimal, meanwhile, played positively to reach three figures, about 40 minutes before the interval.

He moved into the 80s with a boundary in separate overs off seamer Kemar Roach but was then dropped for the second time in his innings on 82 when Jermaine Blackwood failed to hold on to a chance at point off speedster Shannon Gabriel in the first over of the bowler's first spell of the morning.

Unfazed by the let-off, Chandimal whipped Bishoo to the mid-wicket boundary before punching Gabriel over mid-off for another four to record his second straight century in Galle.

D. Karunaratne c and b Samuels 186

T. Kaushal not out 9

M. Samuels not out 7