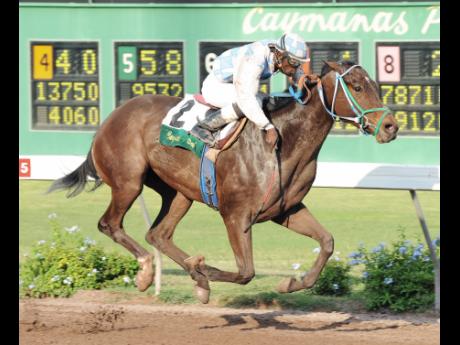 Last Saturday's nine-race programme at Caymanas Park proved a nightmare for punters, but lady luck smiled on one punter who, with a paltry $480 stake, won a whopping $1.4 million on the late Super-6.

According to reports, he carried 8-5 favourite KING WITHIN as a banker in the fourth race and took it from there. It was the first time this year that a small punter was winning so much on the popular Super-6.

We look at the first super-6, which gets under way with a four-year-old and up maiden special to be contested by nine starters over the straight five course.

The race is devoid of good recent form, but horses such as MACHU PICCHU (Shamaree Muir up), BOOK OF RULES (O'Brien White), AWESOME ROCKET (Natalie Berger), and REGINA'S WAY (Javaniel Patterson) have shown enough past form to be considered.

The most consistent of this quartet is MACHO PICCHU, who finished 9 1/2 lengths third to GENUINE ARTICLE and RUNNER RUNNER over the course on September 9 when bumped at the start. RUNNER RUNNER subsequently paid tribute to the form by winning, and the Terence McWhinney-trained MACHU PICCHU should follow suit, having shown good speed in her races.

Trained by Marlon Anderson, who has been getting among the winners this season, COUNTRY TRAIN has already won five races in 2015. She finished a close second to FORCE DE JOUR over the distance on a $400,000 claiming tag on August 29 and with less to do in present company, should make all with Paul Francis riding her in a 10-horse field. The recent winner LOVETTA JONES (Wesley Henry up) and AQUILO (Jevanne Erwin) are twin dangers.

CAMPESINO, with leading all-time jockey Winston Griffiths riding for 14-time champion trainer Philip Feanny, looks the one to beat in the third race over 1100 metres for overnight allowance horses. The five-year-old gelding is out for the first time since finishing a close second to PHINEAS over 1400 metres on June 20, but despite this, has been burning up the track at exercise, galloping five furlongs in a brisk 59.4 (bullet work) last Saturday morning.

Now dropped in class and basically better than his six opponents, CAMPESINO looks hard to oppose even with 56.0kg. RIO COBRE, also dropped in class, looks his principal danger with title-chasing jockey Robert Halledeen aboard.

A chestnut colt by Fearless Vision out of the 1999 derby winner Good Prospect, VISION OF GOLD has looked the part at exercise, galloping five furlongs in 1:01.3 (bullet work) last Sunday morning. He is nicely drawn on the outside at post position 13 and should stave off LIKE A LADY (Henry up), who beat all barring the highly thought of ZUGULU over this trip recently.

POKER STAR, on the other hand, has worked exceptionally well in preparation for this race following a four-month absence and remembering his fast-time win over 1300 metres (1:17.2) on May 2, should return with a bang at the expense of hat-trick seeker GOLD MEMBER. Then, close all bets with INFANTRY OFFICER, who failed by three-quarter length to catch SIR D over the straight on September 26. He renews rivalry with SIR D on 2.0kg better terms and with Shamaree Muir taking the ride, should turn the tables on SIR D, both well drawn on the stands' side in a maximum field of 16,

(4) VISION OF GOLD/LIKE A LADY