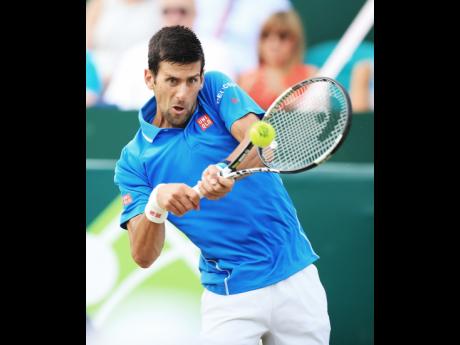 Novak Djokovic has been winning with relative ease over the past week and a half in China.

Djokovic defeated 15th-seeded Feliciano Lopez 6-2, 6-3 to reach the quarter-finals of the Shanghai Masters yesterday, extending his winning streak to 14 straight matches, dating back to his title run at the US Open.

He has also captured 16 straight sets and hasn't surrendered more than five games in a single match since the start of the China Open last week.

Venus Williams advanced to the quarter-finals of the Hong Kong Open by beating Wang Yafan of China 6-0, 6-2 yesterday.

The 35-year-old Williams, a seven-time Grand Slam champion, won the Wuhan Open this month. Another win this week would bring her closer to qualifying for the season-ending WTA Finals in Singapore.

Williams will next play eighth-seeded Alize Cornet of France, who defeated Yaroslava Shvedova of Kazakhstan 6-7 (4), 6-3, 6-4.

The support, which was announced through a UEFA statement, did not follow a vote in the meeting of UEFA members at its headquarters in Nyon, Switzerland, and offered no view on the case itself.

Platini and FIFA President Sepp Blatter were suspended for 90 days last week by the FIFA ethics committee following an investigation into a payment from football's world-governing body.

While Blatter has been replaced at FIFA by acting president Issa Hayatou, Platini retains the UEFA presidency and salary despite officially being banned.