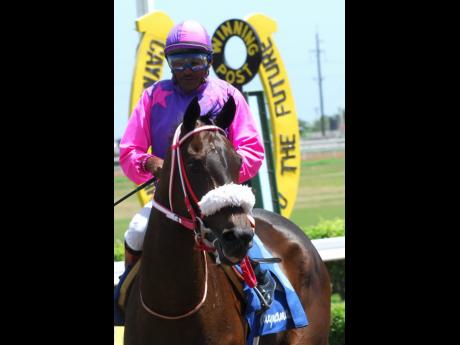 The $10.55 million Supreme Ventures Limited (SVL) Two-Year-Old Triple Crown series commences at Caymanas Park on October 19 (Heroes Day) with the $10.55 million Cash Pot 'Only One For Me' Trophy over 1200 metres taking the spotlight.

This, the 11th staging of the popular series for native breds, offers a million-dollar bonus to the owner of the horse good enough to win all three races. The other races in the series are the $3.6 million Pick-3 Super Challenge Trophy over 1400 metres on Saturday, November 28, and the SVL Jamaica Two-Year-Old Stakes over a mile on Boxing Day, for a purse of $4 million.

To be eligible for the bonus, a two-year-old must pass through the ring in the annual TOBA yearling sales held in November of each year. The outstanding filly PRINCESS POPSTAR became the first horse to win all three races in 2013 but did not qualify for the bonus as she was not sold in the yearling sale, leaving the money unclaimed.

PRINCESS POPSTAR, from the stables of 14-time champion Philip Feanny, was subsequently voted Horse of the Year, the first two-year-old to be so honoured, and was shipped out to race in Trinidad by her owners, Paul Hoo and Herbie Chong, in 2014.

Among those expected to face the starter in the 'Cash Pot' are ZUGULU, DREAMLINER, VISION, FUTURE KING, BUBBLING KITTEN, FEDORA, NUCLEAR AFFAIR, MY COMPANION, A THOUSAND STARS and SORENTINO'S STAR.