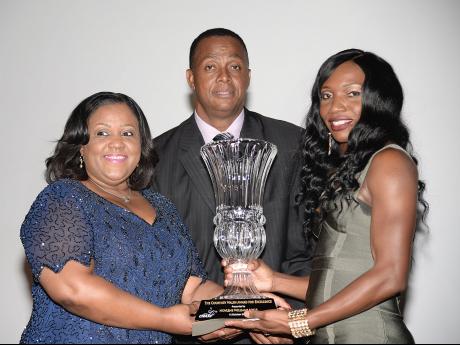 The announcement was made at a ceremony at The Jamaica Pegasus hotel in New Kingston on Thursday night.

"I will cherish this award for all my life because I know that I have worked hard. So thanks to everyone who has supported me over the years," an emotional Williams-Mills said after accepting her award and cash incentive.

"It is truly a honour to be recognised for hard work. Champions and winners were not created overnight, but through years of work," she said.

Williams-Mills hails from the Gravel Hill community in St Ann and has kept Jamaica's name at the forefront of international competition in the 400 metres.

She ran a brilliant anchor leg as Jamaica won the 4x400 metres gold medal at the 2015 IAAF World Championships in Beijing, China.

The performance reflected the character and determination of the athlete as she had been below her usually high standard all season while battling fitness concerns.

In 2012, Williams-Mills was diagnosed with breast cancer, but instead of quitting the track she battled on and her gold medal in Beijing was a fitting reward.

Natalie Neita-Headley, minister without portfolio with responsibility for sports, spoke at Thursday's function in the absence of Prime Minister Portia Simpson Miller.

Neita-Headley spoke of the importance of the award and encouraged all youngsters to aspire for greatness.

"We are working on improving the infrastructure for sports in Jamaica in order to gain more recognition in other sports," Neita-Headley stated..

"You do not have to win to bring honour to your school but you must bring your best effort," Neita-Headley said.