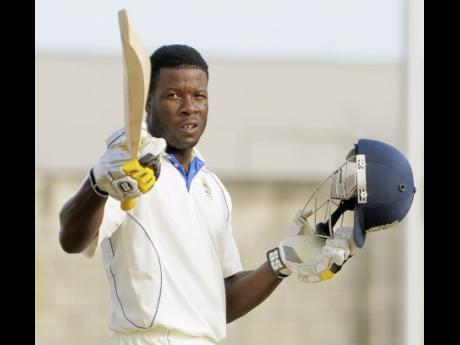 Strengthened by the inclusion of Barbados batsman Kirk Edwards in their line-up, St Catherine CC will attempt to move one step closer to defending their title when they play away to St Ann CA in quarter-final action of the Jamaica Cricket Association 50 Overs Championship today.

The contest, which is scheduled to get under way at 9:30 a.m., will be played at the Noranda Bauxite Oval.

Edwards, who was on Friday named to the Jamaica Scorpions' 13-man squad for their opening round WICB Four-Day Professional Cricket League clash away to Barbados on November 6, is expected to add steel to an already solid 'Saints' batting line-up.

"When you look at Edwards' international and first-class statistics, he should bring a lot to St Catherine both on and off the field," Hyatt said.

"He makes our batting stronger, and with us looking to defend our title this is what we want."

St Ann, like St Catherine, boast a record of four wins and one loss from the zonal stages and according to their coach, Cleon Smith, they are not too perturbed by the presence of Edwards.

"Kirk Edwards is a well-known name in regional cricket, but cricket is played on the field, not by names," said Smith.

"Jamaica Defence Force and University of the West Indies (UWI) had star-studded line-ups and we stopped them."

St Ann, captained by national opener John Campbell, will be looking to stellar performance from Xavier Marshall, as well as Tevin Gilzene and Duran White.

In other matches, unbeaten Kingston, with up-and-coming batsman Brandon King at the helm, will host UWI at Sabina Park. The UWI team will be led by new Jamaica first-class captain Paul Palmer Jr Kensington will travel to Manley Horne Park to face St Elizabeth and St Catherine CA will host St James at Ewarton Bauxite Oval.