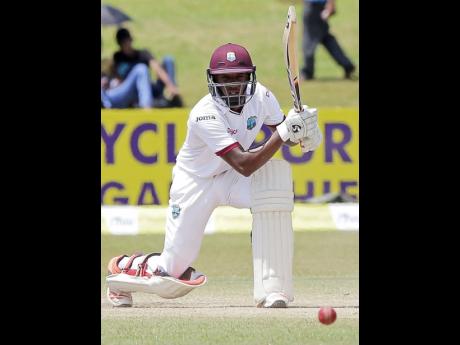 West Indies captain, Jason Holder, has blamed sloppy fielding by his side for their innings defeat to Sri Lanka in their first cricket Test, which ended at the Galle International Stadium here yesterday.

Holder's men crashed to an innings and six-run defeat to Sri Lanka in the second session of the fourth day of the Test match.

The West Indies effort was marred by several sloppy misfields, two missed run-out attempts and five shelled catches, including a sixth that was not attempted.

"We created chances with the ball, but we just didn't take them when we came," lamented Holder.

"If we had, their first innings total would have looked a lot different. If we had new batsmen in at crucial stages when our fast bowlers were fresh, we would have had a chance to have a good burst at them."

Jermaine Blackwood, in a gallant attempt to avert an innings defeat, fell eight runs shy of a century as West Indies were bowled out for 227 in their second innings.

Apart from Blackwood the only other West Indian batsman to score a half-century in the match was Darren Bravo with an even 50 in the first innings.

"It's important that we put up a first innings total that's respectable," said Holder, who played his first match as Test captain, in just his ninth Test overall.

"We only scored 250-odd in the first innings and it set us back. We were pretty much behind the game from there. It was a track you could score runs on once you applied yourselves. Not much in it for the bowlers. Even Rangana Herath - I thought with the harder ball, he was more effective."

Devendra Bishoo grabbed four for 143 as Sri Lanka piled up a huge first-innings score of 484 all out. The 23-year-old skipper applauded the efforts of his bowlers.

"I must commend our bowlers. They did really well in the first innings. To come back at the opposition and actually bowl them out was very, very commendable," Holder said.

"I thought our spinners bowled reasonably well and our part-timers in Marlon Samuels and Kraigg Brathwaite did a wonderful job for us. I thought the combination was good enough for this game. It was unfortunate that we didn't hold our chances. I guess we paid for it."

The second Test will be played in Colombo starting next week Thursday.