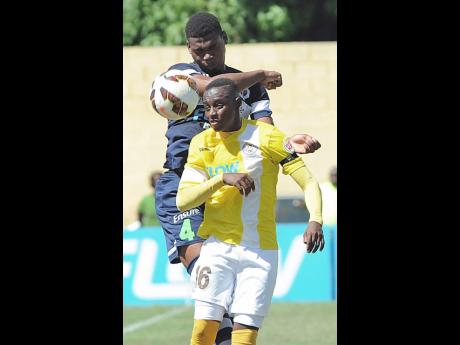 Despite Charlie Smith taking the lead through Ashawn Ricketts, who sliced into goal from an acute angle to send his team ahead inside 26 minutes, JC could have had the game wrapped up had it not been for defenders throwing their bodies behind the ball to stop a goal.

Brown, who was solid throughout the game at centre half, pulled his team back with a long range free kick, which flew through the hands of goalkeeper Okeino Mendez to level the scores at 1-1 in the 53rd minute.

Brown came back to dispatch a clinical penalty to ensure his team finished a perfect five from five.

"I feel great coming back from 1-0 down. I have to give credit to Junior Flemmings. Having played with him from under-14 and seeing how he executes as a leader, I was happy to come out here and follow Junior and get the job done," Brown told The Sunday Gleaner.

Flemmings was vital for the JC team with over 20 goals last year, which lifted them to three of four titles.

It was Charlie's first loss of the season as they pushed the champions all the way. Coach Miguel Coley said he was "very happy with the win".

"We have to continue working on the killer instinct in front of goal. We knew we would not get the amount of goals this season as last year, but we have to get past that and give these youngsters motivation and encourage them," he outlined.

the team did extremely well

Meanwhile, Charlie Smith's Jerome Waite said: "This young team did extremely well. It was only a pity an error was made by the goalkeeper to carry them back in the game. It's a game we should have won 1-0," Waite assessed.

"The dreaded penalties is something that can go either way," he added.

Meanwhile, Hydel vs Wolmer's was another cracking contest which went into extra time due to both teams' inability to hit the target from numerous chances created.

Wolmer's, the 2013 winners, just could not get by the Geoffrey Maxwell-coached Hydel - who are hungry for silverware at the level - in full or extra time.

Coach Vassell Reynolds said it was a good victory.

"The Hydel team came tougher than we thought, but I thought my team held up well and I am happy with the performance overall," he pointed out.

Maxwell said: "I don't think the player's gave their best. We have to look at all our errors and continue in all other competitions."