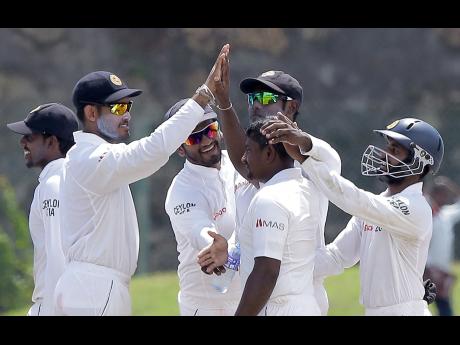 West Indies crumbled to a pathetic innings and six-run defeat to Sri Lanka inside four days in their opening Test at the Galle International Stadium here yesterday.

Jermaine Blackwood fell eight runs shy of a century in a brave effort to avert the innings defeat, but the West Indies, who were asked to bat a second time, were bowled out for 227 in their second innings in the second session.

Just like in the first innings, several frontline batsmen failed to capitalise on starts as the left-arm spinner Rangana Herath returned to haunt the Caribbean side with a four-wicket haul to finish the match with his fifth 10-wicket haul in Tests.

West Indies, resuming the day on 67 for two, facing a deficit of 166, failed to make full use of an over reliance on Herath and lost their final eight wickets for just 160 runs on a slow Galle pitch.

Marlon Samuels, one of Herath's victims, was dismissed for a first ball duck, staying on the back foot to a ball he should have been playing to on the front foot.

The Caribbean side were tottering on 88 for five, after losing opener Kraigg Brathwaite for 34 and Darren Bravo for 31, when Blackwood arrived to launch an enterprising attempt to salvage Windies pride.

The diminutive Jamaican hit 10 fours and three sixes in his 169-minute occupation of the crease, while confirming his status as a promising West Indies investment.

For the most part, he batted freely, using his feet to get down the track to launch Tharindu Kaushal over mid-on for six and drive Milinda Siriwardana for four while running out of partners.

Blackwood carved out a 48-run sixth-wicket stand with Denesh Ramdin, which ended when the partnership was giving West Indies a glimmer of hope.

Ramdin went for 11, driving loosely at Siriwardana and edged to second slip, while Blackwood almost followed in the next over with an edge, spilled by Angelo Mathews of Kusal Perera's glove.

Blackwood reached his half-century just after lunch with support from captain Jason Holder, who hung around long enough to add 36 with him for the seventh.

However, Holder was run out for 18 in unfortunate circumstances as he played across a ball from Herath, which deflected off his pad to Mathews at slip.

Mathews, spotting Holder out of his crease, threw down the stumps with a direct hit.

Kemar Roach was removed in similar fashion to his first innings dismissal to become only the fifth West Indian to get stumped in both innings of a Test match.

When Jerome Taylor departed, lbw to Prasad for five, West Indies were nine down with 44 wickets, still needing to avoid an innings defeat.

Blackwood had no option but to farm the strike to push his side as close as possible and succeeded in rattling Herath, hitting him for two fours and two sixes in the space of nine balls.

But the pressure mounted on Blackwood on 92, with nine fielders on the boundary as he ran down the track, only to pick out the cover boundary, leaving Shannon Gabriel not out on seven.

ST Gabriel not out 7

Position: West Indies lost by an innings and six runs.