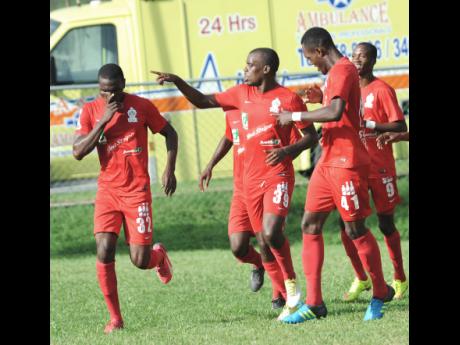 University of the West Indies (UWI) FC moved off the foot of the Red Stripe Premier League (RSPL) football competition, following a 2-1 win against 10-man Boys' Town at the UWI Bowl, Mona, yesterday.

The league's newcomers notched their second win of the season courtesy of goals by Girvon Brown in the 23rd minute and Anthony Greenland (45th). Adrian King pulled back a goal for Boys' Town in the 75th minute.

Shamar Nicholson of Boys' Town was sent off by referee Dwight Royal in the 59th minute after a dangerous tackle.

UWI moved to seven points and 11th place in the standings after the win. Boys' Town (6) dropped to last place in the 12-team league.

"Well, for a change, we were 2-0 up, but time management was not the best. However, we are grateful for the three points that pushed us ahead of Boys' Town," Peart told The Gleaner.

On the other hand, Boys' Town's coach, Andrew Price, indicated that he intended to search for new players.

"The team played lethargic. We just have to find players who want to do a job. I don't think the heart and desire was there today," Price said.