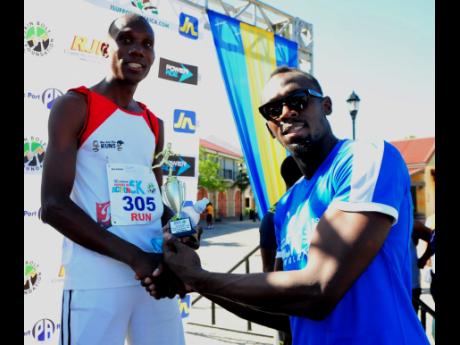 Paul Clarke
Ryon Chambers (left), overall men's winner in the JN Foundation Heroes in Action 5K Run/Walk, held in Falmouth on Sunday, receiving his trophy from Usain Bolt, whose foundation was a partner in the successfully held event.

The organisers of the inaugural Jamaica National Building Society (JNBS) Foundation Heroes In Action 5K Run/Walk were pleased with Saturday's event, which was held in the historic tourist town of Falmouth, Trelawny, with close to eight hundred people taking part.

Ryon Chambers won the male run category in a time of 17 minutes and 58 seconds. Second place was taken by Lenford Adams, 18:15, while Ronique Williams copped third in 18:19.

On the women's side, first place went to Karlene Blagrove of Pacers Running Club in an easy-looking 22:07 minutes. She was trailed across the finish line by Jozanne Harris (Jamdammers) in 22:57 minutes. Jordan Waldschmidt ended in third, running 25:04 minutes.

What made the event more special was the fact that multiple Olympic and World Champion and world record holder over the 100m and 200m Usain Bolt was on hand to send the participants on their way.

Bolt, through his foundation, were key endorsers of the event that seeks to provide funding to the tune of $8m for the construction of a building that will house a classroom, a library and a sewing room at the Granville Place of Safety for Girls in Trelawny.

Also taking part were Bolt's parents, Wellesley and Jennifer Bolt; the town's mayor, Garth Wilkinson; and several other well-known personalities, including members of the Trelawny FA, Linnel McLean (president), Ronald McLean (no relation) and Ms Hernie Brown, among others.

Paula Sinclair won the overall female 5K walk title ahead of Kimberly Clarke, with Brynn Broadie finishing in third place. On the men's side, victory went to AndrÈ Smith of Go Run Running Club. The Jamaica National pair of Vivian Lawes and Jason Henry were second and third, respectively.

Munro's team of Rushane Fullerton, Leon Whyte, Daviere Witter, Marville Yee, and Michael Goss crossed the line first in a combined time of 1:34:26, with Grange Hill (1:45:36) next best. William Knibb had a time of 1:46:1.

Port Authority took the Team Championship 5K Walk, with Good Hope in second and the Child Development Agency back in third.

Saffry Brown, general manager, JN Foundation, described the occasion as a special one.

"It is an awesome occasion. It actually has a special meaning to the Granville School of Safety for Girls and the wider community," said Brown.

"That we are able to hold this event in Falmouth, a very historic town, and with Usain Bolt on board through his foundation, it gives a real sense of pride and purpose to the event," she added.

The event was held as part of the JN Foundation's 141st anniversary celebrations.