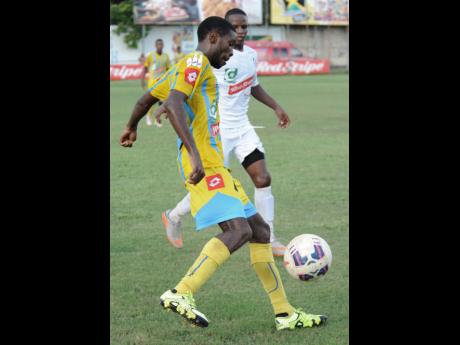 It has been a slow and steady road to recovery for Waterhouse's young ace midfielder, Kenroy Howell.

The attacker was in the form of his life in his young Premier League career when an injury against Tivoli Gardens, which required surgery, halted his progress.

The promising midfielder had surgery done and made full recovery in April. But being out for months, and the fact that he was just coming back from a severe injury, meant the former Jamaica College player struggled to regain the form that made him a fan favourite at Drewsland.

However, on Sunday, the 22-year-old gave a small reminder of his capabilities and his knack for getting goals from midfield, as he scored the only goal in Waterhouse's 1-0 win over Cavalier.

With the game evenly poised, Howell broke the deadlock just before the half hour when he latched on to a low cross from Oshane Roberts and swept the ball past Carlloyd Walters in goal - a real striker's finish - to give his team a much-needed win.

Besides the goal, the player showed great energy at both ends of the field and, on occasions, he opened up the Cavalier defence with his penetrating dribbles from deep. Although things are starting to look promising again, the player insists he has a lot more to give.

"It was very frustrating being off the pitch at first, but I am really glad that I am back. I am putting in the work and starting to see results," he told The Gleaner after the game.

"This is the third start from seven games, and I still have more to give. I just have to come to training, work hard and show it on the pitch," he continued.

"The last time I scored was in Tivoli match on November 5th. I scored a few minutes before I got injured. I feel great about it (scoring on Sunday). We are at the bottom of the table, and to help my team actually get a win, which should put us couple places up in the table, is a good thing, so I feel real good about it," he said.

"But expect more, because I will be trying to put myself in the box and score more goals, and I am just putting in the work as usual and hoping for the best," he added.

The three points lifted Waterhouse out of the relegation zone and into 10th spot on seven points, the same as UWI and Harbour View, who are 11th and ninth, respectively. They are one point in front of bottom-placed Boys' Town.