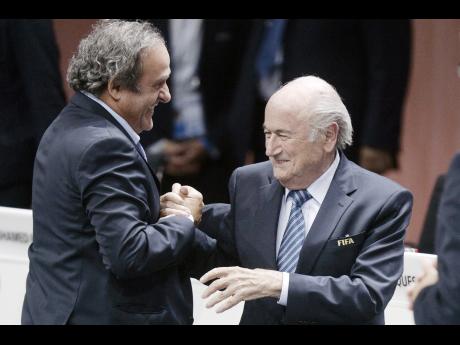 Audit and compliance committee chairman Domenico Scala said that FIFA president Blatter could be culpable of "falsification" of accounts over the 2011 payment of 2 million Swiss francs (about US$2 million) to Platini.

Platini, the president of UEFA, said the money was owed from his job as an adviser to Blatter between 1998 and 2002, but there was only a verbal agreement for the debt.

"Both parties, the president and Mr Platini, should have recused from their positions because both are members of the executive committee of FIFA and they both have a conflict of interest," Scala told The AP in the first public comments on the case by a FIFA insider other than Blatter and Platini.

"Mr Platini has asked the president to pay him a prescribed amount, which he should not have asked, which is why it is a classic conflict of interest."

Both Blatter and Platini are serving 90-day provisional suspensions, while FIFA's ethics committee completes a full investigation into the actions of two of the most powerful officials in world sport.

The case could end Platini's hopes of succeeding Blatter as FIFA leader in an election set for February, although both men deny wrongdoing and are appealing against their suspensions.

Scala is also head of the ad hoc election committee, which rules on the eligibility of presidential candidates, but he has no say in the ethics case.

Blatter last week said he had a "gentleman's agreement" with Platini over the payment.

"If it is true what they are saying - that they had an oral agreement at the time they made the written contract to defer the payment - that payment should have been recorded in the accounts in 2002 and subsequent years," Scala said. "It has not. If you approve as a member of a supervisory board financial accounts which you know that 2 million are not accrued, you have possibly done a falsification of a document."