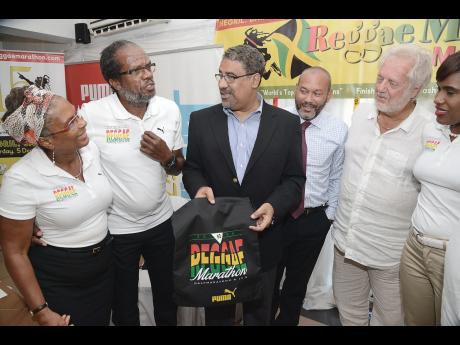 Minister of Tourism and Entertainment Wykeham McNeil has hailed the Reggae Marathon as a unique Jamaican sporting event which has contributed a lot to Brand Jamaica. through sports tourism.

The tourism minister, who was speaking at yesterday's official launch of the 15th annual Reggae Marathon, Half Marathon and 10K at the Altamont Court Hotel in New Kingston, believes this year's event will be exemplary and memorable, as Jamaica seeks to capitalise on earnings from the sports tourism industry.

The event will take place on Saturday, December 5 at 5:15 a.m. at Long Bay Beach Park in Negril, with a record number of participants from more than 35 countries set to participate. Competitors from Saudia Arabia and Suriname are set to compete for the first time.

The tourism minister said the Reggae Marathon was a brilliant concept.

"It brings together two of the strongest brands in Jamaica - sports and our music," McNeil said. "This event shows the potential of sports tourism. As an IAAF-certified event, it is now attracting more than 2,500 runners from as far as Japan. It is an event that has developed a following and a name," he added.

Online registration closes on December 1, via www.reggaemarathon.com or by Reggae Marathon's office located at 87-89 Tower Street.

Race director, Reggae Marathon's Alfred Francis, has invited local runners to step up to the plate and break the records. Only one record is held by a Jamaican - Shawn Pitter for the 10K event, which he set in 2012 at a time of 29 minutes: 55 seconds.

Francis added that there has been an outpouring of support both locally and internationally for the 15th staging of the event.

Meanwhile, Lee Issa, president of the Negril Chamber of Commerce, congratulated the event for "its effort to sustain a high level of professionalism and for its reach internationally".