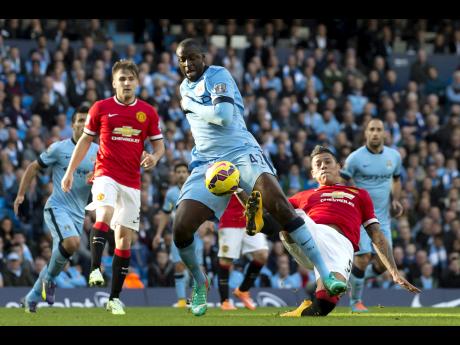 Louis van Gaal was careful to downplay talk of a permanent power shift in Manchester after United's 4-2 victory over City in the most recent derby game.

Old Trafford was rocking that evening in April. After four straight losses to their neighbours, United finally owned local bragging rights. City were on a downward spiral - behind their neighbours in the standings, their title defence in tatters and with manager Manuel Pellegrini's job under serious pressure.

But Van Gaal wasn't getting carried away, and he was right.

Since that painful loss six months ago, the blue half of Manchester has recovered to remain the dominant force in the city - as they have been since the end of Alex Ferguson's 26-year tenure at United in 2013.

City won six straight games after that derby, to finish the Premier League nine points above United and in second place.

After two months of this season, City are in first place, the top scorers in the division and the favourites to capture the title for the third time in five years.

The derby mauling in April seems a distant memory now as City head back to Old Trafford on Sunday for the 161st Manchester derby, the headline game in the 10th round of Premier League fixtures.

The momentum seems to be with Pellegrini's men, who have won their last two league games 6-1 and 5-1. City also had the advantage of playing at home in the Champions League on Wednesday - beating Sevilla 2-1 - while United had to travel back from a game in Moscow on the same night.

However, United are at home - where they are unbeaten this season and have won seven of eight games - and has the incentive of potentially going top of the league with a win. United are third, tied for points with second-place Arsenal, but behind on goal difference.

Arsenal are at home to Everton on Saturday.

The absence of striker Sergio Ag¸ero and playmaker David Silva, who were injured during the recent international break, has robbed City of their two most influential attacking players for the derby. But in Kevin De Bruyne, City has one of the most in-form players in the league, proving so far that he's worth the US$85 million the club spent to make him their record signing.

Pellegrini even called him the "perfect" signing after De Bruyne scored an injury-time winner against Sevilla on Wednesday.

De Bruyne has been rotating, with great effect, with Raheem Sterling for central or left-wing roles in City's attack in recent games. He is hard to pick up and his eye for a pass is arguably as good as Silva's.

Pellegrini's biggest call this weekend is whether to recall captain Vincent Kompany, or retain the centre-back partnership of Nicolas Otamendi and Eliaquim Mangala.

United must make a 1,600-mile journey back from Moscow on Thursday after the 1-1 draw with CSKA in the Champions League, putting the team at a disadvantage ahead of the derby, according to van Gaal.

"Manchester City don't have the travel. We have, so they have more rest," Van Gaal said. "There is nothing you can do. They have the benefit."

United are in mixed form heading into the weekend, having lost 3-0 to Arsenal and won 3-0 at Everton in their last two Premier League games.