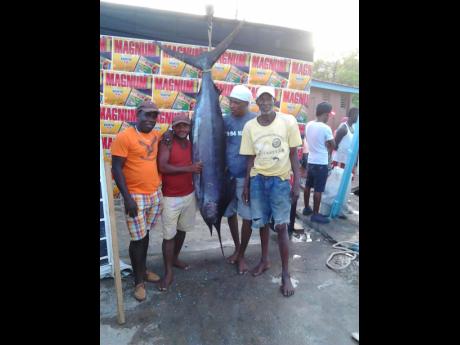 Gareth Davis
Captain of the canoe 'Conqueror' Caiphas McLeggon (right) and his team show off their 136 lb blue marlin, caught during the one-day canoe tournament on Wednesday.

The local canoe tournament, the highlight for local residents in the Port Antonio Blue Marlin tournament, lived up to its expectations on Wednesday with the landing of a Blue Marlin by Caiphas McLeggon, captain of the boat Conqueror.

McLeggon, who is from the neighbouring parish of St Mary, said that it took him 25 gruelling minutes to conquer the 136lb blue marlin and bring it safely on board.

"It was a tough fight," commented McLeggon. "When I felt the bite, I knew it was a marlin and it was probably a big one. We were just off the coast of St Margaret's Bay when the fish grabbed my line, but I was prepared for the fight. It is not my first marlin, as about four years ago I landed a 520lb marlin. Three of us were onboard, and my colleagues assisted me with getting the fish into the boat, " he added.

Forty-five canoes participated in the one-day tournament, which saw the winning team capturing a trophy and a cash prize.

The Port Antonio Blue Marlin tournament resumed yesterday with its fleet of 26 boats. So far, 13 marlins have been tagged and released in four days of competition.

The tournament concludes today with a prize-giving ceremony, along with a grand farewell party this evening at the Old Marina in Port Antonio.