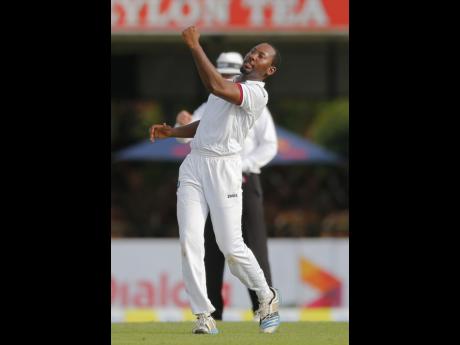 Left-arm spinner Jomel Warrican snatched four wickets on debut to help inspire a Sri Lanka collapse but West Indies then lost opener Shai Hope to stumble to the close on a sluggish opening day of the pivotal second Test, when 12 wickets tumbled.

Opting to bat first, Sri Lanka folded in the final hour at the P Sara Oval for 200, with only Milinda Siriwardana showing any major resistance with 68.

Rangana Herath, batting at number nine, ended on 26 not out while first Test century-maker Dinesh Chandimal chipped in with 25.

The 23-year-old Warrican, brought in for pacer Shannon Gabriel in the only change from the Galle Test, finished with four for 67 and was supported by seamers Jason Holder (2-22) and Jerome Taylor (2-50).

However, Sri Lanka hit back in the 32 deliveries possible before bad light ended play, prising out the right-handed Hope for four, as West Indies reached 17 for one.

Hope perished to the final delivery of the opening over, missing one from seamer Dhammika Prasad that came back and to be trapped plumb in front, with the score on seven.

Sri Lanka had earlier started poorly, losing Kaushal Silva without scoring to the fourth delivery of the day with just a single run on the board, caught at the wicket off Taylor - a decision only given after the Windies opted for review.

In a session which saw only 21 overs bowled, the hosts lost wickets steadily to decline to 59 for four at lunch, with another first Test century-maker Dimuth Karunaratne (13), debutant Kusal Mendis (13) and captain Angelo Mathews (14) all falling cheaply.

Skipper Holder, in the second over of his first spell, trapped the left-handed Karunaratne leg before wicket on the stroke of the first hour with one that shaped in and three balls later in the next over, Roach ended Mendis? first Test innings meekly when he had the right-hander caught at the wicket playing a loose stroke.

Mendis was originally given not out but had the decision overturned on review.

West Indies then ended the session on a high when Holder knocked over his opposite number, Mathews for 14 in the final over before lunch, caught at second slip by Brathwaite pushing defensively.