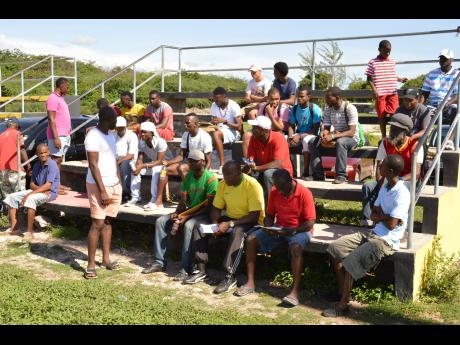 Contributed
Representatives of Corporate Area teams in the Institute of Sports (INSPORTS) Community Football League gather for a meeting at the Tinson Pen playing field.

THE Institute of Sports (INSPORTS) Community Football League, widely known as the 'Ghetto World Cup', is set to kick off next month.

The popular competition had its initial staging in 2009 and spread like wildfire, as the number of participating teams doubled for the islandwide championship.

"It is one of the most popular competitions that we've ever launched," noted Ian Andrews, INSPORTS' administrative director.

The last instalment got under way in 2014, but Andrews explained that due to demand, plus other contingent factors such as a massive swell in participation, the institute had to halt proceedings and re-work its strategy.

Andrews said: "The number of teams doubled within a year, so the demand pushed up the costs."

Through rising demand, the communities have somewhat formed a partnership with the state agency to carry the tournament, which lost its sponsor with the Claro pullout.

"The clubs and teams have agreed that they would help us," said Andrews. "One such area is to share the cost for the officials."

He added: "The communities have been clamouring for it, in fact the entire country ... but we?re doing it parish by parish and we're just continuing what we started last year. We're going to start sometime next month."

As he addressed over 30 Corporate Area teams that attended a meeting for updates on the competition - at Tinson Pen playing field - last Saturday, Andrews said the agency expects to invest over $28m into the League, which will impact over 500 communities across the length and breadth of the nation.

He also thanked those in attendance for their patience over the period of stoppage and promised an exciting finish to the League.

The expenditure, he said, would cover several components including uniforms, playing field development and preparation for games, training and salaries of match officials, certification of coaches and match balls.

Added value came through initial partnerships with the National Council for Drug Abuse and Jamaica Foundation for Lifelong Learning, which targeted and engaged the ?unattached youth? in the communities as a means of fostering holistic development.

Now, without sponsorship, the INSPORTS official said they will have to explore other channels. Still, Andrews vowed not to lower the League's standards.

"It was one of our flagship competitions," he said. "We made it very clear that our thing was not a 'Bush League', but something to empower the communities, to get them playing together and give them something of worth."