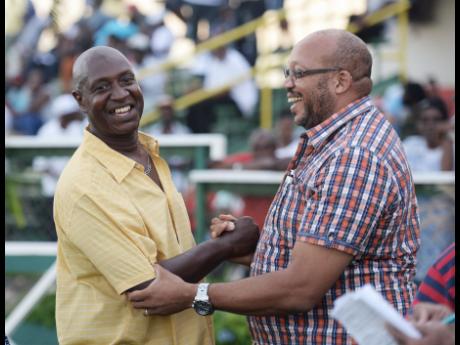 Jermaine Barnaby
Cedric Stewart (right), CEO, Caymanas Track Limited, congratulates owner's representative Patrick Taylor in the winners' enclosure after DREAMLINER, ridden by jockey Richard Mitchell, romped to victory in the 11th running of the Cash Pot Only One For Me Trophy race at Caymanas Park on Monday.

Having finished a good third to SUPERLUMINAL in the July 4 Jamaica St Leger over 2000 metres, SOUTHERN CRUISE will prove hard to beat when he lines up for today's Royal Dad Trophy Restricted Stakes for three-year-olds and up over 1820 metres at Caymanas Park.

Trained by in-form Anthony 'Baba' Nunes, SOUTHERN CRUISE has won four races from seven starts this season, including his first two, to be considered a live classic contender.

However, he flopped in the Lotto Classic (Governor's Cup) and also the Derby in June, before showing his mettle with a late flourish in the St Leger, finishing just on the heels of Derby hero SEEKING MY DREAM, who was second and just ahead of the 2000 Guineas winner, ALI BABA, in fourth.

To say that SOUTHERN CRUISE represents classic form would be an understatement. And strengthened by the fact that he beat BRAWN in decisive fashion over 1500 metres on August 29, suggests he is on song for this race.

Owned and bred by Member of Parliament Karl Samuda, the three-year-old bay gelding by Weekend Cruise out of Honeytonkville still has scope for improvement. Being lightly raced and having worked well in preparation for this trophy, SOUTHERN CRUISE looks the right choice with leading jockey Shane Ellis riding him from the convenient mark of 54.0kg.

SOUTHERN CRUISE can expect worthwhile opposition from his own stable companion HOUDINI'S MAGIC, who bids for a hat-trick of wins, along with BRAWN, now back in good form, and Saturday's scorer, ORIGINAL TRAIN.

Nunes holds a particularly strong hand with SOUTHERN CRUISE and HOUDINI'S MAGIC, both of whom have won over this trip in the past. HOUDINI'S MAGIC is much improved, and while I fancy SOUTHERN CRUISE, the dark bay colt by Performing Magic out of Milestone looks his principal danger. BRAWN, ORIGINAL TRAIN and STAR NEW VISTA should complete the hi-five in a 12-horse field.

Elsewhere on the card, FRANFIELD, now pretty light with 50.5kg by virtue of apprentice's Bebeto Harvey's 4.0kg claiming allowance, should win the knotty open-allowance race over 1200 metres to be contested by 12 starters.

The Richard Azan-trained four-year-old colt ran creditably when finishing third to UNCLE TAF in the fast-run Fontainbleu Trophy over 1500 metres on October 3. With the shorter trip not an obstacle and nicely drawn on the outside, UNCLE TAF gets the nod over TRADITIONAL PRINCE and ALL CORRECT.

I also like DOOLAHIN to win the third race for maiden tree-year-olds, BRAVE PROSPERCT in the fourth, BLACK THORN in the seventh, and XQUISITE CHOICE over CHIEF SECRETARIAT in the eighth.