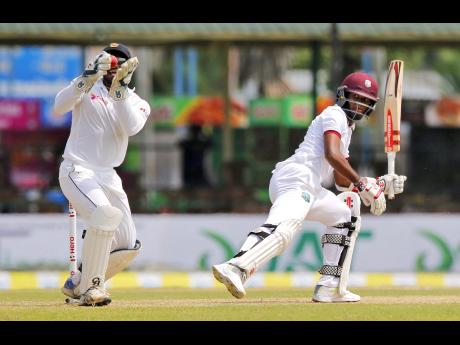 Sri Lanka extended their lead over West Indies to 113 on day two of the second Test yesterday, reaching 76 for two at stumps despite losing opener Dimuth Karunaratne to the first ball of the second innings.

Silva successfully reviewed a leg-before-wicket decision against him when replays showed a delivery from Taylor was missing leg stump.

Earlier, Dhammika Prasad took four wickets to help bowl out West Indies for 163 and secure a 37-run first-innings lead. Resuming the day at 17 for one, the tourists lost three more wickets in the morning session, with Prasad causing the biggest damage.

Night watchman Devendra Bishoo (13) was caught behind by Kusal Perera off Prasad, and Darren Bravo made two before being bowled by Prasad to leave his team on 37-3.

West Indies lost their remaining six wickets for 86 runs in the second session.