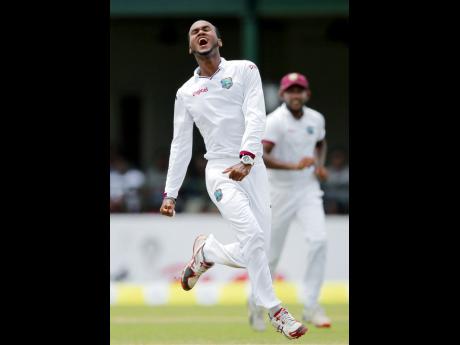 Opener Kraigg Brathwaite grabbed a stunning six-wicket haul to rout Sri Lanka cheaply but he then perished cheaply leaving West Indies with a difficult run chase on today's fourth day, in order to win the second Test at the P Sara Oval.

Trundling his unheralded off spin that had previously brought him a single wicket from 48 overs in his 23 Tests, the 23-year-old ripped through the Sri Lanka second innings with a spell of six for 29 to send them crashing for 206, an hour after lunch on yesterday's third day.

He was supported by debutant specialist left-arm spinner Jomel Warrican who picked up two for 62.

Set 244 to win their first ever Test on Sri Lankan soil, West Indies lost Brathwaite for three to what turned out to be the last delivery before tea as rain arrived to force the end play 10 minutes early. This was before forcing the abandonment of the final session with the score on 20 for one.

The right-handed Brathwaite, as he has done previously in the series, faced 26 deliveries before playing down the wrong line and falling leg before wicket to seamer Dhammika Prasad.

Shai Hope was unbeaten on 17, with West Indies requiring a further 224 runs to win the contest.

Recovery before all out

Earlier, resuming the day on 76 for two, Sri Lanka recovered from two early blows within the first 35 minutes to cruise to 154 for four before dramatically losing their last six wickets for 52 runs.

Captain Angelo Matthews top-scored with 46, Milinda Siriwardana got 42, while Kusal Mendis chipped in with 39 and Kaushal Silva, 32.

West Indies were rewarded in the day's fifth over when Silva edged a defensive prod at Warrican to first slip where Jermaine Blackwood pouched the first of his five catches, at 84 for three.

Two balls later in the next over with no runs added, fast bowler Jerome Taylor got the right-handed Chandimal (12) to inside edge a delivery that came back and wicketkeeper Denesh Ramdin took a sharp catch moving to his left.

Mathews and Siriwardana then bolstered the innings with a 67-run, fifth wicket stand, which kept the West Indies bowlers at bay.

Siriwardana, in only his second Test, played positively striking straight sixes off both Warrican and leg-spinner Devendra Bishoo, who went wicket-less from 20 overs.

*A. Mathews c Blackwood b Brathwaite 46