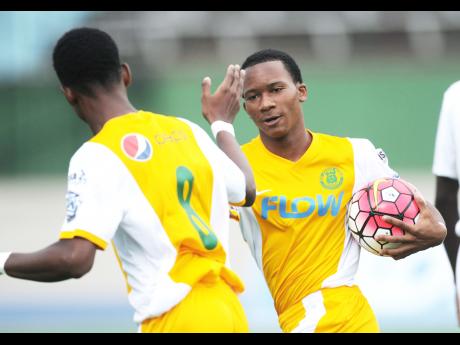 St Jago High, one of the surprise teams in this year's Manning Cup, eased to a 3-1 win over Lacovia High in the ISSA-FLOW Super Cup at the National Stadium yesterday.

The daCosta Cup teams had threatened to overrun their Manning Cup rivals in yesterday's early matches at the Montego Bay Sports Complex and at Sabina Park, but St Jago and Wolmer's Boys, who both won by 3-1 margins, helped to lift spirits among the Manning Cup schools.

The Monk Street-based St Jago put their recent Walker Cup semi-final defeat to St George's behind them with a clinical display.

An own goal gave them the lead in the second minute. Midfielder Ryan Smart caused panic inside the Lacovia defence with a low cross in the six-yard box. Defender Kimar Thomas tried to clear, but only succeeded in slamming the ball into his own net.

St Jago's leading scorer, Shaqon Bryan, continued to find the back of the net and scored his tenth goal of the season. He pounced on a rebound off the cross bar rounded the goalkeeper before taking home in the 21st minute.

Lacovia's Oshane Staple pulled back a goal five minutes from the end before St Jago sealed the win inside stoppage time. Andrew Daley scored his second goal of the season with a thunderous 25 metres strike.

Oshane Staple scored Lacovia's consolation, and his 11th of the season.

Coach Glen Laing said his team was cautious of Lacovia, but happy with the win.

"It was an alright game for us. Goals win games and we try to get at least three each game, so we will try to correct mistakes and move forward," he outlined.