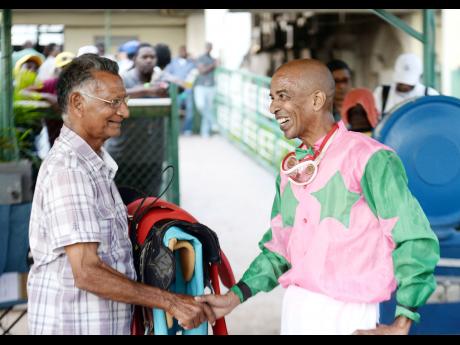 Hall of Fame jockey Winston 'Fanna' Griffiths paid homage to the legendary Royal Dad by winning the race named in his honour aboard 5-1 chance LONG RUNNING TRAIN at Caymanas Park yesterday, his second win on the 10-race programme.

Griffiths, the leading all-time jockey in the annals of local racing with over 1,650 winners in a distinguished career spanning 40 years, was the customary jockey of the 1981 'Horse of the Year' ROYAL DAD, who not only became the first Triple Crown winner at Caymanas Park that year, but the first to win 11 consecutive races as well.

Griffiths, a five-time champion, pushed the ever-present LONG RUNNING TRAIN past the leaders DREAMCOMETRUE (72-1) and DWAYNE STAR (51-1) approaching the 600-metre pole. He then turned back a feeble challenge from 2-1 chance BRAWN to win easily.

Parsard said the change of rider and slower pace made the difference for LONG RUNNING TRAIN who finished 11-1/4 lengths fourth to fast-time winner POKER STAR, and BRAWN over 1300 metres a week ago.

"Today, Long Running Train could sit in the early pace and make her move leaving the half mile. I knew she would have a lot in reserve from the final bend and when I saw Brawn looming for a challenge on the outside, I was not worried," said Parsard, who along with Griffiths had two winners each on the card.

The veteran trainer also posted 9-1 chance GO GO TRAIN to win the fourth race in a bang up finish despite jockey Oneil Mullings losing an iron and had to ride indian style up the lane. And for the second consecutive Saturday, Griffiths booted home the Philip Feanny-trained 8-5 favourite CAMPESINO to an easy victory, this time in the open allowance sprint.