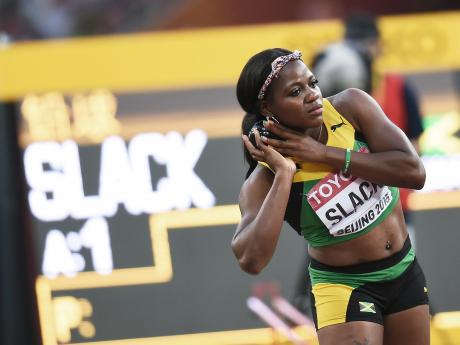 File
Salcia Slack in action at the 2015 Beijing World Championships.

Doctors last month discovered that Jamaican heptathlete Salcia Slack had been competing with a broken elbow since last April. During the period, she competed at a number of major events including the NCAA Division II Championships and the IAAF World Championships in Beijing, China.

She is, however, breathing a huge sigh of relief since doctors said the injury has healed on its own and she won't require surgery.

Slack, 26, withdrew midway competition in Beijing because of the injury, and an ankle injury that hampered her ability to be competitive.

Then just last month, doctors examining her painful elbow told her she had been competing with a broken bone which would have required surgery. However, further scans showed that the injury was now healed. She now has to undergo rehabilitation therapy which might last six to eight weeks. This was welcome news to the athlete who is hoping to make Jamaica's team to the Summer Olympics in Rio in August 2016.

In celebration, she posted on her Facebook page, "On April 8, 2015 I was throwing the javelin and after my second throw, I hurt my elbow while throwing. I had horrible pain after that. I never knew that it was broken twice, so I have been throwing with a broken elbow for months. I did an MRI in September that showed that it was broken, and this had me so worried because it was a high possibility that I would have to have surgery that would rule me out for a year. I have been stressing for weeks now, but the Lord had a different plan for me. The CT scan and the X-Ray came back that it is healed with some swelling to it. Now, it's time for rehab on this arm".

Slack, who is in her penultimate semester at the New Mexico Highlands University where she is majoring in psychology, is hoping to be able to heal in time to compete in what will be her final indoor season. She also harbours ambitions of being selected to compete for Jamaica at the World Indoor Championships in Poland early next year.

On reflection, she said the pain she suffered last season was the worst she had ever experienced.

"I am always competing in pain, but this elbow pain was my worst pain ever. This injury only allowed me to throw one throw after it happened, especially in the javelin. I couldn't even do arm work in the gym after it happened," she said.

Despite the pain, Slack dominated NCAA Division II last season during which she won a handful of awards including Athlete of the Year, and led her team to a third-place finish at the NCAA Division II Championships in Michigan in May. She was also inducted into the school's Hall of Fame.