Tony Becca: Sehwag: I did it my way 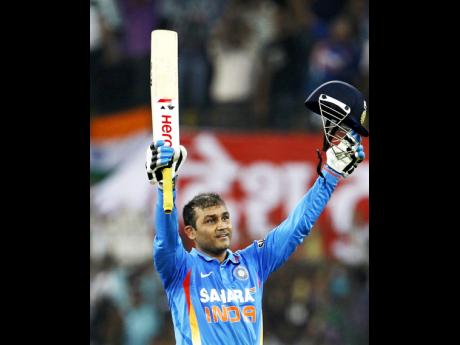 Virender Sehwag was an opening batsman like no other. He was not a sheet anchor, and he was not a man who played cautiously and sometimes timidly. He was a happy, carefree batsman. He feared no one.

He was also, especially in his early days, a lookalike of India's great batsman, and his cricketing hero, Sachin Tendulkar.

On his Test debut versus South Africa at Bloemfontein in 200, he totally enjoyed himself.

Batting alongside Tendulkar, who scored a century, he was in seventh heaven. Sehwag scored a century also, a lovely, attractive innings of 105 off 173 deliveries with 19 boundaries.

Those who saw it said there was hardly a debut like it. It was as if he and Tendulkar were twins, reeling off classic and elegant stroke after stroke.

That was the early Sehwag. Three years after that, however, in 2003 against Australia in Melbourne, Sehwag exploded, and the explosion lasted for another 10 years, until 2013 when he played his last Test match.

Although he once scored 201 out of 329 against Sri Lanka in Galle in 2008, the runs he scored were only a part of his legacy. They marked him as one of India's best batsmen, as one of the world's greatest batsmen, and, even if this is not important, one of my favourite batsmen of all time.

Sehwag was not a stodgy batsman, and he was not just an attractive batsman. He was the most attacking and ruthless batsman the game has ever seen. Left to him, there would have been no need for the one-day or the T20 versions of the game, if the intention was solely that of playing entertaining cricket in order to attract spectators.

As he said, his mission in life was to entertain the fans.

To see him driving off the back-foot, driving straight along the ground and in the air, or whipping the ball off his legs was something special. His square-drives were also powerful and beautiful.

For those who do not know, Sehwag, in Test matches, scored at a rate faster than anyone else has ever done, which means he is the fastest scorer in Test cricket's history.

His 8,273 runs and 15 centuries from 251 ODI's, including his best of 219 versus the West Indies at Indore in 2012, is impressive. They were, however, not as staggering or as dazzling as his collection of amazing deeds in Test matches, some of them achieved against the odds whenever India were facing long odds on troublesome pitches and against the fast bowlers, especially really fast and fearsome bowlers.

As one of four batsmen, Don Bradman, Brian Lara, Chris Gayle, Sehwag, to score triple centuries on two occasions, Sehwag's 319 against South Africa in Chennai in 2008 was scored off 304 deliveries and included 42 fours and five sixes, and his 309 versus Pakistan in Multan in 2004 came off 375 deliveries and included six sixes and 39 fours were awesome.

In some respects, however, although they were bigger scores, they failed to compare with many of his smaller yet exquisite offerings.

Probably the best of them all, however, according to those who saw it, was his innings of 297 versus Sri Lanka in Mumbai in 2009, an innings which lasted for 254 deliveries, and included seven towering sixes and 40 powerful and wonderful fours.

Sehwag failed sometimes, but it never mattered to him. He played cricket like how the fans loved to see cricket play. His Test career, studded with 1,233 fours and 91 sixes, was a glittering and unforgettable one.

"God has been good to me and I have done what I wanted to do", said Sehwag on the day he retired. "I did it my way."

There was never a dull moment when Virender Sehwag was batting. Thank God, he did it his way.