JC not 'letting up' 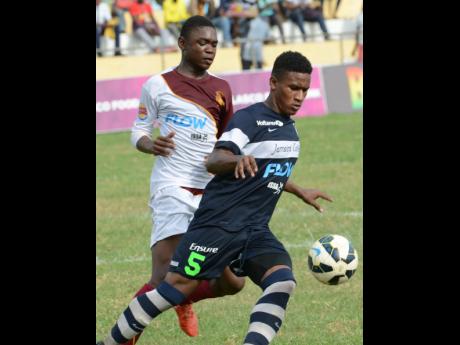 Jamaica College captain Allando Brown, who has been a difference maker and leader for the Inter-Secondary School Sports Association/FLOW Manning, Super and Olivier Shield holders, is promising 'no let up' as his school fight to defend their titles this season.

Brown, who also represented the national Under-20 football team and Arnett Gardens in the Red Stripe Premier League, has been rock solid at centre for JC.

He has scored some crucial goals and provided priceless leadership in the heart of defence to either keep clean sheets or limit opponents scoring.

"Jamaica College is always about fighting spirit. No one can beat Jamaica College at 1-0. Trust me, I like the fight from our team always," he said recently after their Walker Cup quarter-final penalty shoot-out win over Charlie Smith.

Brown pulled an equaliser back in that game and scored a penalty, and although his team was eliminated in the semi-finals by Wolmer's Boys, Brown later led them back to winning ways, courtesy of a 2-1 win over Vere Technical in the Flow Super Cup on Saturday.

"Still hard work. The hard work never stops for us," he said.

"Our aim is to get all titles".

The captain maintained that he is motivated to give his all to the team previously led by former outstanding JC footballer Junior Flemmings.

"I have to give credit to Junior Flemmings. I have been playing with Junior from under-14, and seeing how he executed as a leader, I am happy to come out here and follow and get the job done," he said.

Flemmings netted over 20 goals for the JC team last season, and is seemingly missed by a JC team which seemed more ruthless and clinical in front of goal last season when they took three of four titles.