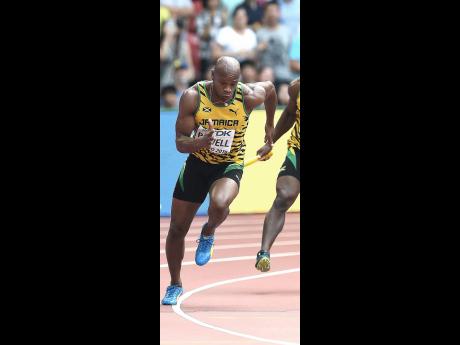 Asafa Powell could be looking to cut back on the number of races he competes in before the Olympic Games in Rio next summer as he aims for his first individual medal in the Olympic men's 100 metres.

At the International Association of Athletics Federations World Championships in Beijing, China, in August, the 32-year-old sprinter was among the favourites to win a medal in the 100 metres but finished seventh in 10 seconds flat, the same time as his sixth-placed American rival, Tyson Gay, and French champion Jimmy Vicaut, who was eighth.

Powell had a season best of 9.81s going into Beijing, but suggested that his heavy racing schedule may have sapped his ageing legs for the final.

"I had a long year. I just have go back and analyse to see where I went wrong in the season. We ran 13 or 14 races before the World Championships, and that's probably something we shouldn't do," said Powell.

The athlete, who won gold as a member of Jamaica's sprint relay team at the Olympic Games in 2008, has never won an individual Olympic medal. He has two bronze medals in the blue riband sprint at the World Championships in 2007 and 2009 to go along with the relay gold he won this summer.

Rio would be his fourth Olympic Games, having first represented Jamaica in Athens in 2004 when he was favoured to win but finished out of the medals in the race won by American Justin Gatlin.

Powell expressed gratitude for being able to represent Jamaica again and make another global 100-metre final.

"The greatest thing is that I went to the world championship and made the finals as one of the favourites," he said.

"I am still happy just to be in it. I have been doing this for years now, and I love it. Just to be out there smiling and hearing the crowd cheer you on, it's a great honour and privilege."