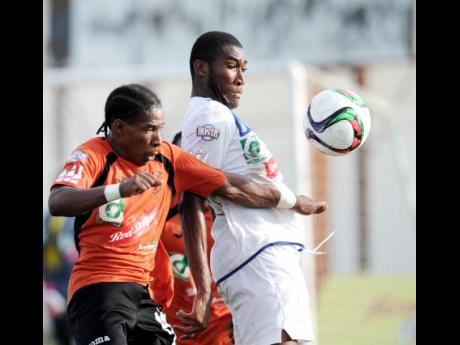 Victory lifted the Montegonians two points clear and gave them sole leadership at the top of the standings on 17 points.

Williams netted after just four minutes and added his second on 45 minutes for his eighth goal of the season.

The striker, who has been nursing a groin injury for the last four weeks, capitalised on a mix up in defence to nod home the opener.

Tivoli offered very little going forward in the first-half, with the visitors looking more threatening on the offensive and the speedy striker headed in from a corner just before the break to give his team a 2-0 lead at the interval.

However, Williams did not return after half-time.

"I am not 100 per cent fit, and as an injured player, to get two goals in a tough game, I can't complain," the 25-year-old national striker said after.

"To come out and score two goals I have to give thanks, because every time you come out as a forward you want to score and to get two more today, to push my tally to eight, feels great ... . So I have to just keep working hard, and each game I come out and see if I can do it for my team," he continued.

"When you are on a run, you know at some time you are going to go on a drought, so each time you play you just have to try to score. Sometime during the season the drought is going to come, so I just have to make sure I get as many in the first round to go into the second round," he added.

After the break, Tivoli came out transformed and pinned their opponents in defence for half-hour. Junior Flemming was the main antagonist, taking right back Donovan Carey apart at will, but his teammates, especially Miguel Ricketts, failed to take advantage of his good work down the left.

Although the intensity dropped after 75 minutes, Tivoli continue to threaten but could not find the net despite some near misses.

MoBay moved two points clear of Portmore United, who were held to a 1-1 draw by Reno, which advanced to 12 points. Tivoli dropped to 11 points.

MoBay's coach, Timothy Hankinson, said the early goal gave them the start they wanted and the second put them on the path to victory.

"Tivoli is a determined squad, they never gave up and we were fortunate to hold our goal clean. We are proud to find a way to be successful to this point, but we know there are a lot of challenges ahead," he said.

Tivoli's coach, Christopher Bender, said: "The team wasn't at it best and they needed to be for this contest."