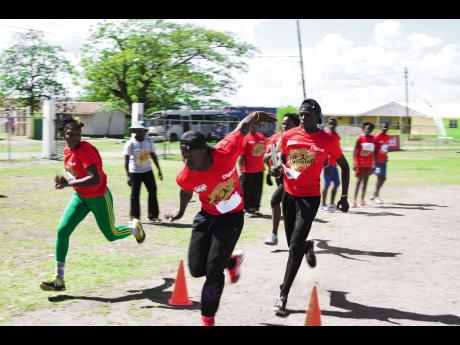 File
Participants in the Digicel MVP Grassroots Athletics Clinic held in Clarendon at the Vere Technical High School put to practice what they have learnt during their relays training session.

Digicel and MVP Track and Field Club have, for a third year, partnered to host the Digicel MVP Grassroots Athletics Programme.

The initiative is aimed at providing world-class professional level training for high-school track-and-field athletes in their pet events, as well as to introduce them to other disciplines in the sport. These disciplines include hurdles, throws, jumps, middle distance, sprints, and relays.

"We recognise that tomorrow's future starts now. Therefore, we have to begin nurturing the talent of our future track-and-field stars as early as possible," said Kamal Powell, Digicel's senior sponsorship and development manager.

He added: "Digicel does not want to be there only for the end result, we want to ensure that we play an integral role in their development, taking them from grass roots to greatness."

The remaining clinics to be held in Montego Bay (Catherine Hall Stadium) and Kingston (National Stadium) will host the top-performing athletes from the previously held clinics, who will undergo even more intensive training.

Bruce James, president of MVP, noted his pleasure with the progress thus far.

"We have already hosted the pre-clinics for 2015 and the response, so far, has been tremendous. Both coaches and athletes have been giving us positive feedback. They are particularly pleased that we have increased the number of technical sessions to now include relays," said James.

Aiming to strike a balance, Digicel has also renewed the four-year scholarship, tenable at the University of Technology (UTech). The scholarship will be awarded to the student who not only demonstrates outstanding athletic talent during the programme, but also meets the matriculation requirements of the university. The student will also be able to train at UTech with the world-renowned coaches and athletes at MVP.

The 2015-16 recipient of the scholarship is Marvin Williams, the third-fastest boy in the world in the 400m hurdles this year, with a time of 49.90 seconds.