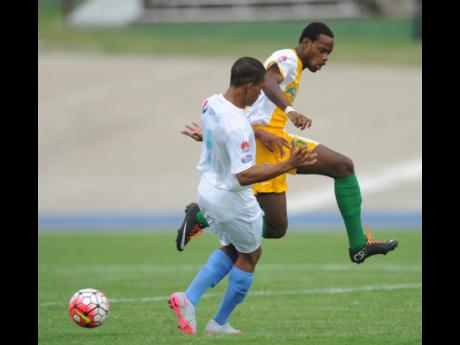 The Flow Super Cup in schoolboy football is a good innovation. Now in its second year, it gives the local football fan a good look at under-18 footballers across the island. The format, which includes seeding the top-four Manning Cup teams and the top-four Dacosta cup teams so they avoid each other in the first round, sets the stage for a 'can't-wait' attitude among fans looking forward to the quarter-finals. In the first round, the only seeded team to lose was the Tappa Whitmore-coached St James High, which lost to Excelsior in the dreaded penalty shoot-out.

In schoolboy football's league format, the Dacosta Cup and the Manning Cup, the winner is usually the team that (a) has the coach who has the ability to adapt and change tactics and personnel during a game as circumstances dictate, and (2) has the most of the starters of the first three games being available for the final three games. That is true, because the talent pool among the top schools is usually on par. The Super Cup, or "money football" as some call it, allows fans and analysts to get a very good look at the quality of these schoolboy 'ballers', trying to find out just what is stopping local footballers from being considered when national duty calls.

The bald fact is that the present JFF hierarchy, buoyed by the successful 1998 formula (using the "foreigners in the closing stages of qualifying) when Jamaica reached the finals of the World Cup, have replicated this reliance on 'foreign' Jamaicans year after year, with failure after failure. The JFF hierarchy have failed to realise that the players whose 'skills' allow Jamaica to qualify in the early rounds, only to fail when it matters most, and more important, these 'Jamaicans' then show a remarkable disdain for 'us' and have shown very little interest in returning to help develop 'local' football.

The FLOW Super Cup gives fans and analysts an opportunity to get a close and personal look at how our young men play football. The answer, even at this early stage, is that local football among under-18 boys lacks programmes and coaches who pay enough attention to basic skills, such as trapping a ball, controlling a hard pass without having it bounce five yards away from the target of the pass, and the desire to shoot the ball at the goal when a opportunity arises. Yet, the present schoolboy footballer plays a lot of football. Too much, some critics say. There are summer camps, practice games and tournaments before the season starts. Then there is the league formats, Manning Cup and Dacosta Cup, knockout games, Walker Cup and Ben Francis Cups, the Olivier Shield, and finally the Super Cup. Yet, the flaws remain the same year after year, game after game.

Winning schools are few, victory apparently due to the ability to 'poach' (or buy) talented players from other less-favoured schools, instead of building a winning team from scratch by identifying talent among the school population and working on the skills mentioned earlier, ultimately developing a team skilled in the basics and coached by someone who is able to recognise weaknesses during a game and making positive and decisive adjustments.

Unfortunately, so far, this season, nothing like that is apparent. The problem, in my view, lies in the fortunes of the Montego Bay United Premier League (MBU) team, whose administrators have looked overseas for a coach, hired him, and now has shown locals the importance of tactics and personnel adjustment during games. Watch this team in the Red Stripe Premier League. Will the MBU administrators allow their coach to advise (or teach) our schoolboy coaches, or will we continue the same old same old with the predictable result: Jamaica loses (again) in the World Cup Qualifiers? Jamaica's football needs a radical overhaul! Will those that matter - the delegates - have the will (cojones) to do the right (and brave) thing?