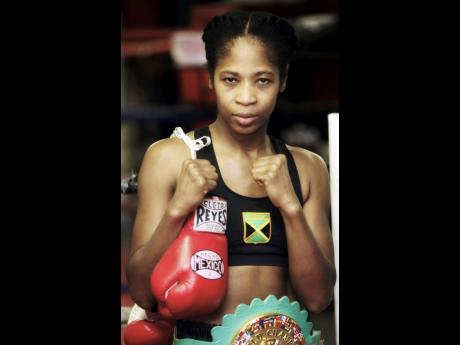 "I am excited and can hardly wait to get into the ring tomorrow night to regain my world title."

Jamaica's Alicia 'Slick' Ashley sounded quite eager to get back in the ring as she spoke with The Gleaner yesterday about her World Boxing Council (WBC) Super bantamweight title fight tonight against Irish boxer Christina 'Lightning' McMahon, at the Aviator Sports Complex in Brooklyn, New York.

Ashley previously held the title from July 23, 2011 to September 6, 2014, when she lost it to Jackie Nava by way of a controversial majority decision in Mexico.

Since that victory, Nava also won the World Boxing Association (WBA) version of the title and was declared a super champion. She therefore gave up the WBC title, leaving it vacant and Ashley and McMahon will go at each other tonight to succeed her.

Ashley takes a 22-10-1 record with four knockouts into the ring, while McMahon, who is the interim WBC bantamweight champion, goes in with a 7-0 record that includes three knockouts.

Ashley has more experience than her opponent and told The Gleaner that she had "a great camp" and is ready for the fight.

She confessed that her trainer has been having a hard time keeping her in check these past few days.

"I am so up for this fight that I just wanted to keep working and working, but he told me on Tuesday that I am ready and should now take it easy."

The unbeaten McMahon, who also boasts an impressive amateur record, is a fast mover inside the ring and has good hand speed, hence the nickname 'Lightning'.

She likes to go after her opponent, so with Ashley being a good all-round boxer who moves quickly and counter-punches effectively, everything points to a fast-paced fight with plenty action.