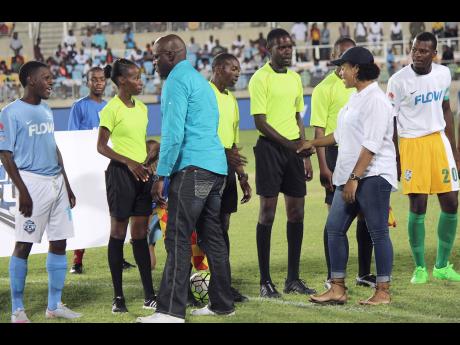 Forbes was asked to comment on the situation after second-round matches between Wolmer's Boys' and Vauxhall High and defending champions Jamaica College vs Holy Trinity were affected by rain at the Constant Spring venue.

The Wolmer's-Vauxhall match was called off by the referee due to a waterlogged field, with six minutes of play remaining.

The match official, who seemed to play it by the rules for the JC vs Holy Trinity game, a rule which posits that once 80 per cent of the field is playable, then the game should be played, saw defending champions JC and Holy Trinity draw 0-0 in a game which began at 4p.m. and concluded under lights.

"Definitely, here (Constant Spring) is what we can afford. Flow can play their matches where they play them, but we (ISSA) don't have the between five and $800,000 and up to a $1 million to put on a game," the ISSA competitions officer told The Gleaner in an interview.

"If you look at the crowd here, I don't think we have collected $100,000 at the gate, so it is not prudent for us to put a match where you are going to spend four, five million dollars and you collect $100,000 at the gate," he reasoned at Constant Spring on Monday, while the Manning Cup matches were in progress.

Forbes noted that there has been ongoing debate over venue selection for the last five years.

"Look at the Premier League venues. Boys' Town don't have any field. Waterhouse could not play there. Arnett Gardens is the only place that we could play and the parents for most of the kids (players) don't want them to go to these inner-city venues in the second round," he stressed.

"We have made some improvements to Constant Spring. We have invested some money in it. There is some more work to be done, and it's something the Constant Spring management and ISSA have to sit down and look into for next year," he assured, adding that vehicular parking in muddy areas will be addressed.