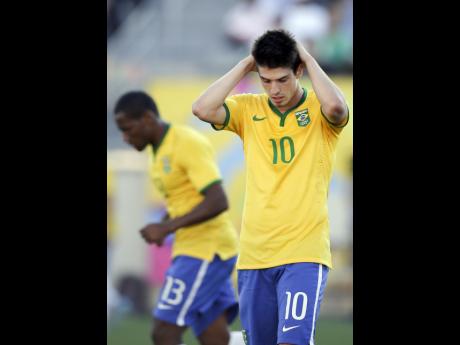 AP photo
In this July 23 file photo, Brazil’s Lucas Domingues reacts after missing an opportunity to score against Uruguay during the second half of a Pan Am Games semifinal soccer game in Hamilton, Ontario.

Toronto police issued arrest warrants today for two Brazilian soccer players accused of sexually assaulting a woman while in Canada for the Pan Am Games this summer.

Andrey Da Silva Ventura, 22, and Lucas Domingues Piazon, 21, are wanted in connection a sexual assault that allegedly occurred as the Games were winding to a close in July, police said.

Piazon "vehemently denies the accusations," according to a statement from the public relations firm that represents him, JornalismoFC. The firm also said Piazon hasn't been notified by Canadian authorities yet and is studying what legal measures to take. Andrey has yet to respond to requests for comment.

The Brazilian Football Confederation said the players were no longer under the responsibility of the national team when the alleged assault occurred.

"They are adults. It's a situation that involves just them. There is no way for the CBF to take a stance," the confederation said in a statement. The organisation added that the players can seek legal assistance from the CBF but have not done so.

Beaven-Desjardins said the two men are accused of sexually assaulted a 21-year-old woman on July 25. She said the athletes encountered the woman and a friend at a popular downtown venue, after which the four returned to a private home. The woman claims the soccer players sexually assaulted her while she was asleep, then fled the scene.

The players returned to Brazil the next day.

Beaven-Desjardins said Ventura is wanted on a Canada-wide warrant, while the warrant for Piazon applies only to Ontario.

Beaven-Desjardins said Ventura would have to go through a lengthy process to be returned to Canada to face charges since there is no extradition treaty with Brazil.

The rules are different for Piazon, who is only wanted on a provincial warrant.

"We can't go through the extradition process, but when he does come to Ontario, he is can be arrested," she told a news conference.

Another Brazilian athlete has also been accused of sexual assault while taking part in the Pan Am Games.

Police have a warrant out for Thye Mattos Ventura Bezerra, a 27-year-old water polo player accused of sexually assaulting a 22-year-old woman in her home.