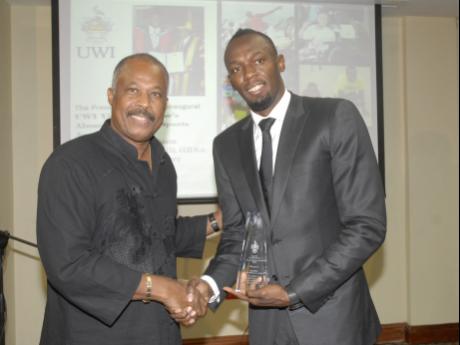 The award was presented yesterday at a ceremony at the Regional Headquarters of the University of the West Indies (UWI).

"Dr Bolt is one of the greatest men of Caribbean times, and it is fitting that the UWI - a highly respected Caribbean institution - acknowledge his legendary athletic prowess and contribution to regional advancement," Sir Hilary said.

The Vice Chancellor's Award for Exemplary Performance on a regional and international level, he explained, "recognises not only outstanding

performance, but also the importance of being a positive role model to Caribbean youth in the area of sports and good sportsmanship and highlights the awardee's affiliation with the UWI as a graduate".

Bolt is the fastest man to hold both the 100 metres and 200 metres world records since fully automatic time measurements became mandatory in 1977. He is also the first man to win six Olympic gold medals in sprinting and 11 World Championships.

Bolt, who received an honorary doctorate from the UWI, Mona, in 2011, has sports facilities at both the UWI's Mona and Cave Hill campuses named in his honour.