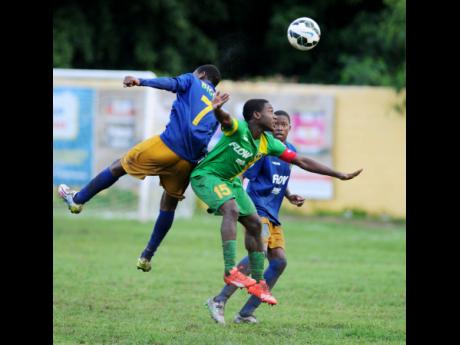 Wolmer's Boys secured a 2-1win over Vauxhall as they played out the remaining six minutes of their previously rained-out ISSA/Flow Manning Cup encounter at Constant Spring yesterday.

The game was originally called off on Monday, with both teams locked at 1-1 due to a waterlogged field.

Wolmer's win adds more pressure for Group H rivals and defending champions Jamaica College (JC), who now sit two points behind, along with Holy Trinity, with whom they drew on Monday.

JC must now win their game against Vauxhall next Thursday in a Constant Spring double-header starting at 1 p.m., with Holy Trinity and Wolmer's facing each other in the feature game at 3 p.m.

Wolmer's and JC will square off in the final group game for both teams in what should be an intriguing contest.

Wolmer's got the go-ahead goal when Stuart Payne cleverly beat the off-side trap to punish them from close range.

"We have now scored five goals in two games, so I think we are improving," said Reynolds.

Also yesterday, Charlie Smith came from behind to secure a 2-1 win over Calabar High in the first game of a Group K double-header.

Captain Shaquille Notice led with a match-winning brace, scoring in the 37th minute and stoppage time of the first half (45+one), despite Romaine Rollins sending Calabar ahead inside 30 minutes.

"We showed character to come from behind, and it's a good feeling, but we still have a lot of work to do," he stressed.

Meanwhile, goal-shy Excelsior fell 0-1 to a fighting Jonathan Grant in the later game.

Tyrone Small scored the lone goal in the 40th minute, from Jonathan Grant's only real chance of the contest, while Excelsior missed several chances from point-blank range.

Jonathan Grant coach Oneal Thomas, who himself was a former Excelsior Manning and Walker Cup winner, was happy despite his team's win over his alma mater.

"We don't really have the equipment to really match up to what Excelsior has, but we are happy with the 1-0," he said.

Following their wins, the group is jointly led by Charlie Smith and Jonathan Grant, respectively, on three points.

ISSA is asking spectators to stop stealing the match balls that go outside the grounds, with up to five balls going missing in one game on Monday.