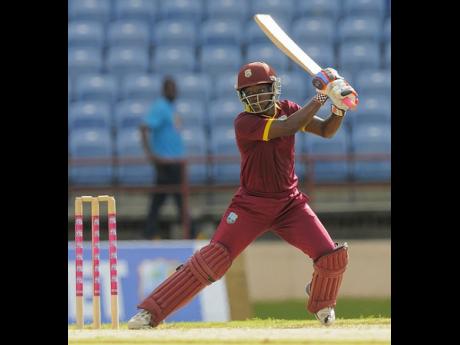 Aggressive top-order batsman Deandra Dottin believes her match-winning unbeaten 38 against Pakistan Women yesterday was a key innings in helping her return to form.

The right-hander managed only a highest score of 25 in the preceding four-match one-day series but produced a matured knock at the National Stadium here to help West Indies Women go 1-0 up in the three-match Twenty20 series.

She had earlier taken two for ten with her steady seamers to help restrict Pakistan Women to 74 for nine from their 20 overs.

“I feel very good [about the innings]. Having come off a bad ODI series but still going out there and putting in the hard work, it’s like a never give up situation,” she said after the game.

“I just came out here and tried to put my best foot forward in the T20s and have a good knock.”

Dottin arrived at the crease with her side in trouble at 24 for two in the sixth over, in pursuit of 75 for victory.

The 24-year-old batted with confidence, facing 39 balls and counted three fours and a six, as she anchored an unbroken 54-run, third wicket stand with former skipper Merissa Aguilleira (15 not out) to see the hosts to victory with 22 balls remaining.

“There wasn’t any nerves really because I knew what I had to go out there and do, so I just stayed out there and batted, and played each ball on its merit,” Dottin said.

West Indies Women will face the visitors in the second T20I on Saturday at the same venue, with the third scheduled for Sunday, and Dottin said the team was confident of a clean sweep.

“We are very happy [with the win]. We had a plan coming into this T20 [series] as in winning all three T20s so it is a good thing winning the first game,” the Barbadian said.

She added: “Of course I’m looking forward to the next two games. We’re going to whitewash Pakistan.”