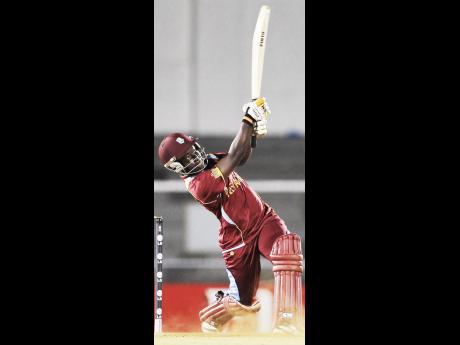 Deandra Dottin took centre stage for the first time on the tour as West Indies barely broke a sweat in disposing of Pakistan Women by eight wickets in the opening Twenty20 International of the three-match series here yesterday.

Opting to bowl first at the National Stadium, West Indies Women restricted the visitors to 74 for nine, with seamer Dottin taking two for 10 from her two overs.

She then returned to stroke a fluent unbeaten 38 as the hosts cruised to their target, with 22 balls remaining, to take a 1-0 lead in the series.

West Indies Women were slumping at 24 for two in the sixth over after losing openers Hayley Matthews (9) and Stafanie Taylor (8) cheaply, but Dottin partnered with former skipper Merissa Aguilleira, 15 not out, in an unbroken 54-run third-wicket stand, to pull the innings around.

The Kiwanis Club of New Kingston will host a charity golf tournament on Sunday, November 15, at the Caymanas Golf and Country Club. The theme for the tournament is 'Swing for Life - Follow through for Kids with Cancer', and proceeds of the event will be used to fund the club's charities and its major project for 2015, which is focusing on helping children with cancer.

The tournament will be played on an 18-hole stableford format with a shotgun start at 8:30 a.m.

Other activities on the day include a 10 a.m. Kalooki tournament and a fashion show and awards ceremony at 1:30 p.m.

Jamaican Johnson among winners at Woodbine

Riding on the eight-race programme, Johnson took the last race of the day with 13-1 outsider Mindfulness, in a seven furlong trip.

He was joined by reigning Woodbine champion, Barbadian Patrick Husbands, who captured race two with 11-1 bet Awesome Overture and Juan Crawford, also of Barbados, who scored in race seven with 9-1 chance Bold Aljabr.

Husbands, who will be dethroned as champion this season, continues to close in on 100 wins for yet another season as he sits third in the standings on 95 wins.