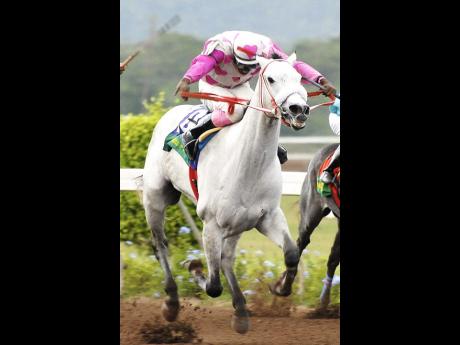 Both the Pick-9 and Super 6s start anew at Caymanas Pak tomorrow with guaranteed minimums of $1 million and $750,000, respectively.

We look at the first Super-6, which commences with a $450,000-$400,000 claiming race over 1300 metres in which down-in-class ITALIANO will prove hard to beat with 4.0kg claiming apprentice Amoy Gray riding for trainer Gary Subratie in a field of eight.

The six-year-old grey gelding has beaten better in the not-too-distant past, slamming subsequent winner SIR SOUTH over 1200 metres on September 22.

Formerly trained by 14-time champion Wayne DaCosta, ITALIANO was beaten into sixth place by BORDER LINE in high claiming company in his subsequent race over 1300 metres, but now back among his peers with a mere 52.0kg by virtue of the apprentice 4.0kg claim, should easily account for ASIA'S DREAM to give the apprentice his first career win.

Next on the programme is a 4-y-o and up maiden condition race over 1200 metres to be contested by nine pretty moderate horses. It looks a wide open affair given the lack of quality and absence of worthwhile form. Hence, top apprentice Linton Steadman is given the edge aboard HE'S A DIAMOND, with ALL FOR THE GLORY and D GIRLFORME her main rivals.

The well-forward 2-y-o colt PIANO MAN, with veteran jockey Ian Spence riding for 14-time champion trainer Philip Feanny, is tipped to make a winning debut in the third race over 1100 metres. The bay colt by Liquidity out of Oaks winner All For Pleasure has looked sharp in his preparation, galloping five furlongs in 1:01.0 on October 15 and 36.2 heads on for three furlongs on with stable-companion BUBBLING KITTEN.