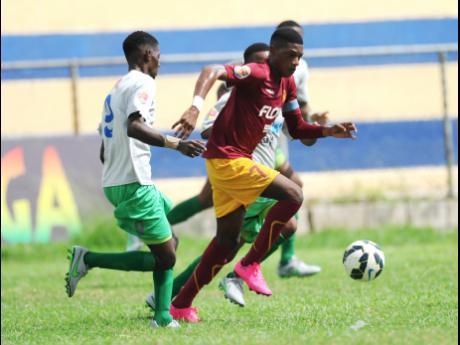 The main battles will be at Sabina Park. St George's College, located just a stone's throw from the venue, should have massive support when they line up against Clarendon-based daCosta Cup team Glenmuir High at 4 p.m. Two hours later, Wolmer's Boys will face rural kingpins Clarendon College at the same venue.

Over at the National Stadium, high-riding St Elizabeth Technical (STETHS) will oppose surprise team St Jago at 4 p.m. before Jamaica College square off against Excelsior High in an all-Manning Cup affair at 6 p.m.

Wolmer's coach, Vassell Reynolds, who played in the rural competition himself, says his 'town school' will not take their 'rural opponents' for granted.

"I expect the rural schools to push the urban-area schools all the way, but we (Wolmer's) will win," Reynolds warned.

Meanwhile, Clarendon College will be looking to rebound quickly from a quarter-final daCosta Cup defeat earlier this week, and will arrive at Sabina Park with victory in mind.

"As usual, we are confident and are looking forward to a good game. I know Wolmer's are a very impressive team, but we also have what it takes to triumph and to move on," Clarendon College's coach, Paul 'Tegat' Davis, told The Gleaner.

"It is a long season, four trophies are on offer, and we are still in the hunt for all of them, so it means we are on track.. Wolmer's are in front of us and we need a victory; that is what we are focusing on right now," the former Reggae Boy stressed.

Last year, Manning Cup teams filled three of four semi-final spots and Clarendon, STETHS and Glenmuir will be looking to turn the tables and stake their claim for the FLOW Super Cup and $1 million prize.