STETHS score a lot, but we are strong - Laing ... St Jago coach confident ahead of STETHS battle 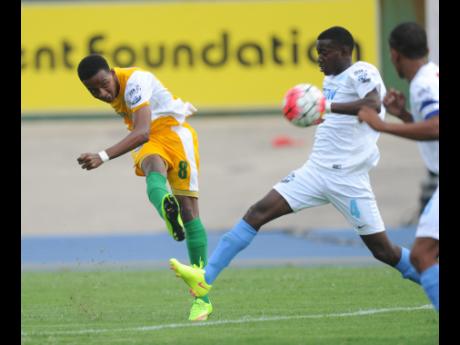 St Jago High School's coach Glen Laing is looking to pair all-out attack and sound defending as he looks to lead his charges a step closer to a trophy this season.

With only the 2003 Walker Cup title in their trophy cabinet,

St Jago will line up against many-time daCosta Cup champions

The last team standing, Laing contends, will be his.

"It's all-out attack for us. We play direct football, and the one thing about schoolboy football over the years that is not going to change is that once you score goals and defend well, you will win," said Laing, adding that his team is balanced in attack and defence.

"We notice they have a lot of goals scored against them; they have scored a lot also, so I am just trying to get my defence right for the game," he added.

St Jago is coming off a three-game winning run, while STETHS seem to be peaking just at the right time, with three wins in the daCosta Cup inter-zone round, and a win in their first quarter-final and the ISSA/Flow Super Cup Round of 16, respectively.

"We have not conceded a lot. We watched their games on YouTube. I watched them against Munro College and others, so it's possible to defeat them. Their strength is really scoring. We are planning to deny them scoring opportunities," stressed Laing.

He described the Super Cup as a motivation for his team.

"This Flow Super Cup carries a certain prestige to it, so my guys are up and running, motivated and lifting their game match by match to win. STETHS is always a tough opposition. They are coming into Kingston and trying to deny us a victory, but we are motivated to win," he said.

"The Super Cup is like an international tournament, with exposure and incentive for the guys, so my players will play to enjoy the game, enjoy themselves, and represent their school well," he added.