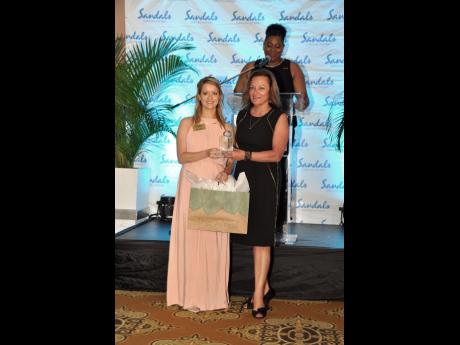 Contributed
Manchester City FC youth coach, Jared Ince, interacts with a student of the Early Stimulation Plus school while members of the Digicel Foundation and teaching staff at the school look on. 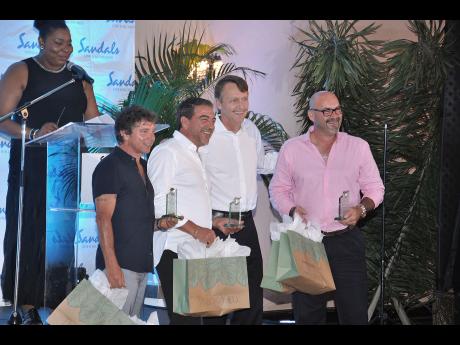 THE tourism sector is hitting up a lot of positives on the golf course, with tournaments geared towards some of the leading players in the travel industry.

The latest instalment took place towards the back-end of last week, with the 21st renewal of the Baxter's Golf Tournament, also referred to as the Canadian Travel Industry Golf Tournament, at Sandals Golf and Country Club in Upton District, St Ann.

"We get the opportunity to sell Jamaica, golf and the Sandals product," he explains. "The travel industry professionals get to experience Jamaica, particularly as it relates to golf. When the travel pros come it enhances the tourism product, the tourism golf product and after the experience they can go back and offer it to other packages."

Kevin Percy, Jacques Gilbert, Bob Wakeford and Daniel Murray were the leading competitors in the two-day tournament, while Joe Grind DeMarinis, Enzo DeMarinis and Leo Sgovio headed the other contenders.

Traditionally, there are added components to the championship, specialised segments that form part of its fundraising drive.

"The tournament not just focused on the travel industry, there's a charitable segment to it," Arthurs outlined. "There is the Closest to the Pin, Longest Drive and Putting and Chipping contests and the competitors pay to enter these contests. The proceeds go to the Sandals Foundation."

"Those prose proceeds go directly into our junior golf program. It's the only way to secure the program and continue the development of the youth," Arthurs stated of the Sandals Golf and Country Club youth program.

Wesley Brown, now a pro on the United States circuit and Romaine Evans, the current Caribbean amateur champion, were products of the system funded with proceeds from the yearly Travel Golf Tournaments.