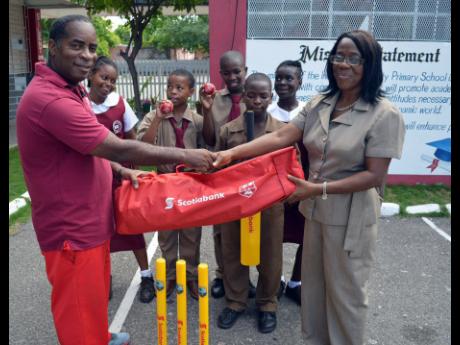 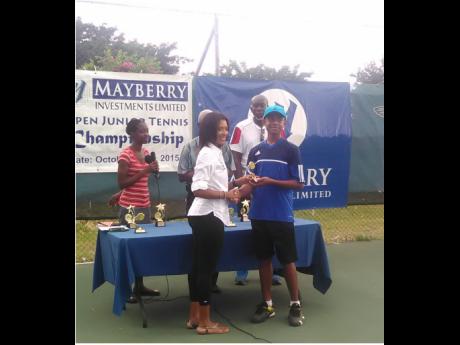 The competition is held in Fraser-Pryce's Waterhouse community where she grew up and will see two matches today - Moshouse vs Penwood at 4:00 p.m. and Chappaz vs Carrifters at 5.00 p.m.

The competition has attracted 24 teams divided into six zones of four each. Each team will play each other once in a round robin format, with the winner of the six zones and the two best second-placed teams advancing to the knockout round.

The final is tentatively set for Saturday, December 12 and there will be prizes and awards for the top four teams, most valuable player, leading goalscorer and the most disciplined team. Telecommunications giant Digicel, for which Fraser-Pryce is an ambassador, is the title sponsor, while Grace Kennedy, Wisynco, Tank-Weld Metals, Sagicor Bank and the NCB Foundation are associate sponsors.

Both teams held a victory over each other in the preliminary round and the much anticipated final lived up to expectations.

RJR, led by radio personality Jennifer 'Jenny Jenny' Small and including ace goal shooter Chantae McKinley, Krystal Tomlinson and Janella Precius, kept pace with their opponents up to the third quarter, but allowed SERHA to slip away in the latter stages.

Despite a strong rally, the Winston Nevers-coached RJR were just too late and a leg injury to McKinley at a crucial stage did not help matters.

The Kiwanis Club of New Kingston will be hosting a Charity Golf Tournament on Sunday November 15.

The Theme is "Swing for Life - Follow through for Kids with Cancer" and proceeds will be used to fund charities serve d by the organisation, including its major project for 2015, which will help children with cancer.

In this regard, it's focus will be placed on changing the world by serving children, one child and one community at a time.

The inaugural 2015 West Portland Women's Cricket League, to be hosted by the West Portland Sports Committee, under the patronage of Member of Parliament, Daryl Vaz, under the theme 'We are the Inspiration', gets going tomorrow with an opening ceremony at Lynch Park (St Georges Sports Club), Buff Bay.

Action commences 5:00 p.m. with a march and an on-field parade, after which Chepstowe takes on Windsor Castle at 5:30 p.m., followed by Shrewsbury vs Industry at 7:30 p.m.

The competition, which is structured in a semi-league format, is sponsored to the tune of $800,000 and the finals are expected to be held on Sunday December 20 at Lynch Park. A total of 52 matches will be played over the six weeks, with the league director being Stephen Williams of the West Portland Sports Committee. He can be reached at (tel.) 308-7455, (fax) 913-6119.

Three-times defending champions UTech males lead the points standings with maximum four points, followed by University of the West Indies (UWI) on three points and GC Foster College with two points. The top two finishers will meet in the final.

On the females side, UTech earned two points and GC Foster one from today's match, the first female match to be played. These two teams will meet in the final, after the return match, as only two teams are participating this year. A new champion will be crowned as six-times defending champions, University of the West Indies, are not taking part this time around.

The competition continues next Thursday at 2 p.m., with GC Foster at home to UWI in a males contest.

Defending champions Passage Fort United crashed to their first defeat of the season as they were humbled 250-231 by Ken's Wildflower in the penultimate round of the Colin Fagan-sponsored South East St Catherine Constituency Domino League last Sunday.

The second set of games in the FLOW-sponsored St Catherine Major League football competition will be played today at four venues in St Catherine.

Member of Parliament for East Central St Catherine, Arnaldo Brown, will cover the expenses for the preliminary round of the League.

Portsmouth won last year's final, with an exciting 13-12 win in overtime. This year's competition is expected to be another humdinger.

Exceptional put in a less than spectacular performance and were hammered 250-182 by leaders Spit Fyah (53 points), in the Jamaica Domino Council Association (JDCA) League last Sunday.

Preparations are in high gear for Horizon Park Primary School's netball rally, which will be held on Friday November 27 on their school grounds, starting at 8 a.m.

Organisers said the event will be "unique, thanks to the special arrangements and efforts of their sponsors".

For registration details, contact Vaswani Samuels at 981-8114. All entries must be submitted before the closing date of Friday November 13. The cost of registration is $2500.

The 2015 season of the Institute of Sports (INSPORTS)/Chubby Portmore Primary Football League will kick off on Tuesday November 3 at the Portsmouth Primary football field, with an opening ceremony and two matches.

Chubby are the main sponsors of the League, which includes cash incentives and also products from the sponsors.