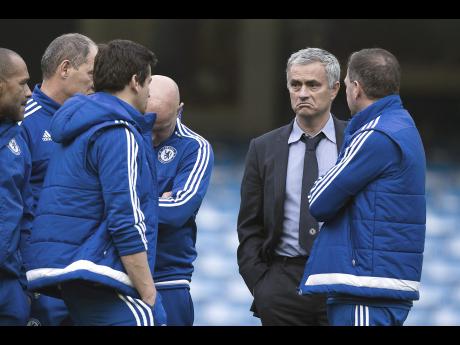 AP
Chelsea's head coach Jose Mourinho (second right) talks with his coaching staff after coming back out onto the pitch following the English Premier League match between Chelsea and Liverpool at Stamford Bridge stadium in London yesterday. Liverpool won 3-1.

Chelsea's slump in form under Jose Mourinho reached a new low yesterday after a 3-1 loss at home to Liverpool, while Arsenal and Manchester City continued to set the pace at the summit of the Premier League.

Manchester United, meanwhile, were held to another 0-0 draw, this time against Crystal Palace.

Chelsea had the perfect start at Stamford Bridge, taking the lead through Ramires' powerful header after only four minutes.

But Liverpool refused to be flustered, growing into the game and taking control of possession. Philippe Coutinho equalised on the stroke of half-time, powering past a Chelsea player before steering a left-footed shot beyond Asmir Begovic from the edge of the penalty area.

In the second half, Liverpool's intent to win was evident. Coutinho gave his side the lead on 74 minutes with a shot which deflected off John Terry, before Christian Benteke sealed Juergen Klopp's first league victory as Liverpool manager and Mourinho's sixth league defeat this season.

In a television interview immediately after the match, Mourinho looked shaken, repeatedly answering questions with, "I have nothing to say".

He opened up a little more in the post-match press conference, insisting he does not fear for his job as manager of the team he guided to the Premier League title only five months ago.

"There are things that are out of our hands," Mourinho said. "I have some players really sad in the dressing room and I am full of respect for them."

Arsenal beat Swansea 3-0 with goals coming from Olivier Giroud, Laurent Koscielny and Joel Campbell in the second half.

Toure's penalty came after Russell Martin handballed and was sent off. City missed a second spot kick, through Aleksandar Kolarov, in added time.

Both City and Arsenal have 25 points, but City are first with superior goal difference.

Manchester United drew 0-0 at Palace, their second straight goalless draw in the league after being held by City last week.

Louis van Gaal's side dropped to fourth, with Leicester moving third after coming from behind to beat West Brom 3-2 away.

Striker Jamie Vardy scored his eighth straight game for Claudio Ranieri's side. The England striker is the league's top scorer with 11 goals in 11 matches.