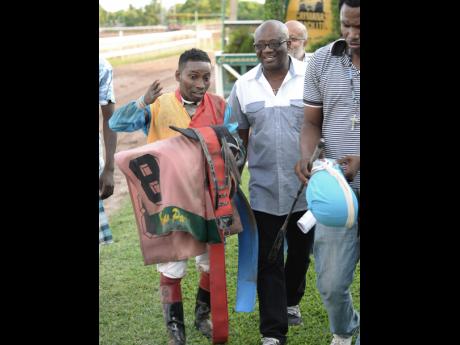 The unbeaten filly FEARLESS FURY reported from a 10-layoff to win the Flossie McNeil Memorial Cup over 1200 metres in decisive fashion at Caymanas Park yesterday.

Installed a 2-1 favourite despite the lengthy absence, FEARLESS FURY was given a patient ride by Wesley 'Callaloo' Henry in a field of 14 fillies and mares, eventually coming through from just off the early pace to win by 21/2 lengths from the fast-finishing DASH BOARD (7-1), heads on with the leader RAISING THE BAR (15-1) under leading jockey Shane Ellis.

Highly fancied JESSE'S FAVORITE (3-1) hurt her chances by being slowly away and was unable to recover, as YOGA and FIRE ALARM disputed the lead into the straight, before RAISING THE BAR and then FEARLESS FURY burst on the scene.

A chestnut filly by Fearless Vision out of the Al's Silver Cat mare Raging Fury, FEARLESS FURY is owned and trained by Fitzroy Glispie, who said that despite the lengthy absence due to a leg injury, he waited patiently for months to ensure she was ready for this race.

"She cracked a sesamoid bone after her impressive fast-time win over 1100 metres when making her two-year-old debut last December, and this required surgery," said the former jockey.

On a day which produced a number of upsets, Henry and top apprentice Linton Steadman rode two winners each, while trainer Tyrone Prince saddled two. Steadman actually passed the post first aboard three of his mounts, but DOC HOLIDAY (7-2) was disqualified and placed third for causing interference to the third horse UNBREAKABLE in the latter stages of the seventh race and first place awarded to the 21-1 outsider LEGENDARY PLEASURE.