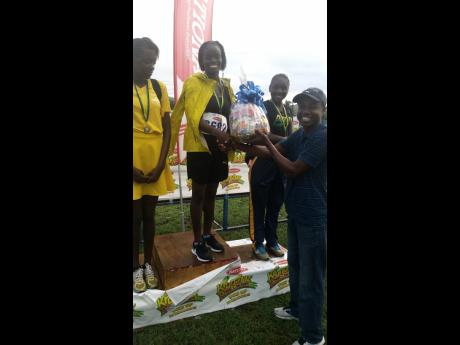 James, formerly of the University of Technology (UTech) and who now attends The Mico University College, had an easy win among the females where she stopped the clock at 18 minutes, 37 seconds. Mavis Bank High School duo of Crystal Brown (21:04) and Shantai Chamberlain (21:35) finished second and third, respectively.

Both winners were pleased with their success a 5K event.

"It was not a hard race despite the rain. The heavy shower throughout the race did not affect me and I was able to pull through despite good competition from Gordon, who is very regular in these races," said Adams, a past student of Claude McKay High.

According to James, it was part of her early season training regimen.

"For me it was a part of my training and it was quite easy for me. The only problem I had was water splashing up in my face due to the heavy shower before and during the race," she admitted.

Meet organiser Ian Forbes was very pleased with the turnout.

"The objective for this year's staging was once again met as all four races went through okay. The turnout was very good despite the rain. The main event was a bit challenging due to the heavy showers earlier, but this also helped with the cool conditions," observed Forbes.

"It is one of the longest road races in Jamaica and the resources from this event goes back into the sports programme at Jamaica College," he noted.

One-Mile Females 10 and Under

One-Mile Males 10 and Under