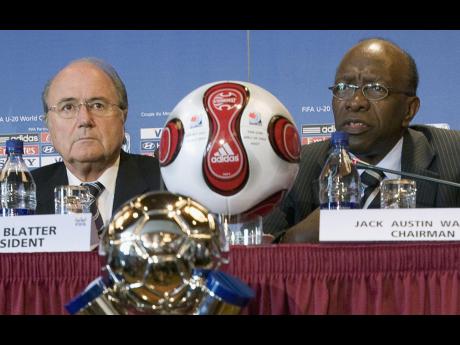 In the not-so-distant past, FIFA, its six confederations, including CONCACAF, the Caribbean Football Union (CFU), Jamaica Football Federation (JFF), the parish associations, clubs, and even school associations were quick to call their football organisations a family.

They preached it day and night, "We are a family, no matter how much we fight internally".

FIFA is wealthier than 75 percent of the countries in the world. Its president, Joseph 'Sepp' Blatter, is afforded more respect that most heads of state. He lives and travels in grandeur. He has friendships with kings and some of the most respected humans on the planet.

He was once listed at number 70 among the most powerful men in the world, alongside US President Barack Obama and Russian President Vladimir Putin, by Forbes' Ranking.

He surrounds himself with vice-presidents who run things in their confederations, except Europe (well, not true anymore; we were just led to believe that). It now appears that Michel Platini was always on Blatter's side. He was used to get rid of the Swede, Lennart Johansson, now 85 years old, the man who ran against Sepp Blatter twice and was Blatter's biggest rival until Platini ousted him in Europe in 2007, eight years ago.

Platini still cannot explain satisfactorily to FIFA's Ethics committee how he got paid over US$1.3m, nine years after he did work for FIFA. Neither can Blatter.

Well, Bleachers Report can state that eight years ago, he won the European presidency, and Blatter has had no challenge from within Europe since.

Austin 'Jack' Warner ruled with an iron fist and foot. Under Jack, even the mighty US Soccer had to vote for Sepp Blatter every time. Jack delivered the votes en bloc from CONCACAF. A total of 41 (20%) votes out of 209 ballots is nothing to scoff at and, as you know, Jack was not only the CFU/CONCACAF boss.

Jack chose his own vice-

presidents in CFU and CONCACAF. If anyone else got themselves nominated, Jack just made it known that you could not run against his 'Anointed' without backlash, and he would force the 'upstart' to back down or feel his wrath.

Jack was all powerful. He bought the Caribbean World Cup television rights for US$600,000 from FIFA and sold it for US$20m to a Jamaican media company. This is now being investigated.

At the CONCACAF and CFU annual general meetings, financial statements are scarce commodity, and no one dares to ask any question.

This skinny soccer dad of 35 years ago grew to a 450lb man. Life was good in FIFA.

Jack's successor as CONCACAF boss, Jeffrey Webb, was already chairman of the FIFA finance committee at less than age 40 (very impressive). He became a FIFA vice-president before age 50, and even Bleachers Report liked him at first as we had compared him to Jack.

All these powerful men then went from being powerful, as, once their actions came under scrutiny, they began to fall like ninepins.

At a CFU meeting in 2011, the heads of some CFU affiliates in the Caribbean were filmed taking bribes of US$40,000. They even signed for the money.

Jack resigned from his FIFA vice-president position in 2011 to avoid a trial by FIFA's ethics committee.

Blazer met his demise a couple years later, and fast forward to today, Blatter and Platini have been suspended for 90 days; Webb is wearing a monitoring anklet after taking up bail of $10m in the United States; Jack is awaiting extradition from Trinidad and Tobago to the US to answer fraud and money laundering charges; Blazer's affidavit was signed and lodged with US authorities. He has already named 40 co-conspirators, and the description of the co-conspirators are very familiar to other football officials that Bleachers Report has come in contact with over the years, while another six FIFA officials are in Swiss jails fighting extradition to the United States.

Presidential hopeful Chung Mong-Joon got a six-year ban for actions while lobbying for South Korea to host the 2022 World Cup; FIFA general secretary Jerome Valcke was suspended for 90 days over ticket sales; and Frank Beckenbauer is in problems, admitting that the German Football Association made a mistake by paying over money to FIFA, which may have been used for a bribe.

Bleachers Report agrees that FIFA is one big family and, at one time, all football administrators' only ambition was to be a member of that family.

Captain Horace Burrell missed no opportunity to remind all and sundry that he is part of the inner workings, and he is the man for the job in Jamaica, as he has political clout and his relationship with the FIFA hierarchy is unbreakable.

Well, Captain Burrell, information garnered by Bleachers Report is that you will not be elected at the next go-around as a vice-president of CONCACAF, as not even the presidents in the CFU will support you or anyone close to the FIFA 'family'.

Daddy Sepp is gone from FIFA forever; Uncle Jack is going to the United States, whether he likes it or not; Cousin Jeffery will soon return to court in the US later this year; and Stepfather Blazer has confessed to his crimes.

All FIFA's bridges are falling down; brothers, sisters, grandfather, son (Jack's sons have already confessed to their sins) will soon be going to the US or Switzerland. The Swiss and US authorities have said the scandal uncovered so far is at the tip of the iceberg.

Captain, where is your political clout now?

And here comes Montego Bay's Orville Powell to challenge for the title. Next week BR will look at that challenge.