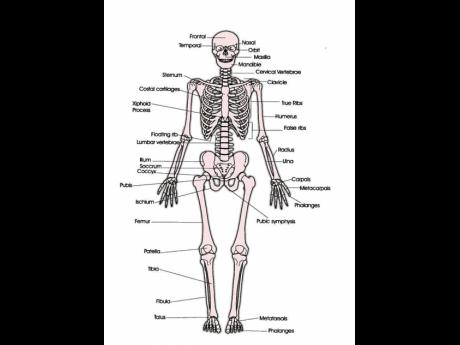 The human skeleton is composed of 206 bones. The skeleton is the framework of the body, without it the body would be shapeless. The bones are shaped according to their function.

- Flat, as the sternum and scapula.

- Short as in the ankles and wrist.

- Irregular, as in the vertebrae.

- Round, as in the patellae.

The bones of the arms, legs, shoulders and pelvis make up the appendicular skeleton.

The bones of the skull and face and the auditory ossicle, vertebrae, ribs and sternum, make up the axial skeleton.

There are five principal functions of bones.

- Support the body, enabling you to stand erect.

- Protect the internal organ and tissues.

- Assist movement by coordination with muscles and joints.

- Serve as sites for formation and development of blood cells in the bone marrow (haematopoiesis).

Bones develop in the growing foetus through a process called ossification. The skeleton is completely formed by the end of the third month of gestation (pregnancy). After birth, bone growth proceeds from the epiphyseal plates (growth plates). Growth proceeds from the end towards the centre of the bone. When the bone has reached its full size and growth ceases the epiphyseal growth centres are replaced by bone cells.

Longitudinal (length) bone growth and ossification usually continue in girls until about age 15 and age 16 in boys.

However, bones continue to mature and develop their final shape until about 21 years of age.

The whole growth process is controlled by hormones. If there is too much growth hormones the cartridge in the plates grows too fast and results in gigantism, while too little hormone leads to dwarfism.

Bone formation and resorption are caused by the actions of osteoblasts and osteoclast. Osteoblast make new bones and at the same time cells called osteoclast break it down. Exercise causes osteoblast to work harder. But, extreme training, especially with weights at young age, can result in problem with bone deformity.

Bones get more fragile as you age and can get weak and break easily (osteoporosis), especially in women.

The most important nutrients for growth are:

- Vitamins - Vitamin D helps with the absorption of calcium and is found in milk, fish, liver and eggs. The body also makes it with sunshine.

- Minerals - calcium which gives strong bones and teeth and is found in milk, cheese fish and green vegetables.

A joint is where two or more bones meet (articulate). There are more than 100 joints in the body. Joints are divided into three types based on the amount of movement they allow.

In these, bones are fused together by tough fibres. These types of joints are found in areas requiring strength. Examples are the joints between the plates of the cranium (skull) and the fused joints in the sacrum.

In these, a small amount of movement can occur. The bones are linked by cartilage. Cartilage is a tough but flexible cushion of tissue that stops the bones from knocking together (friction) and can also compress a little to allow slight movement. Slightly movable joints are found between most of the vertebrae in the vertebral column and the joint between the ribs and sternum.

All freely movable joints share features which prevents friction between moving bones. One of the main features is the presence of synovial fluid between the moving bones. The bones are held together by slightly elastic fibres called ligaments, which allows the bones to move; any damage to the ligament results in the joint losing some of its strength and stability.

Joints work smoothly together when we perform sporting activities. They must be capable of their full range of movement in order to work well. The demands of sport put severe stress on joints. Therefore, it is essential to warm-up before an activity and cool down after the activity.

Joints can be injured as a result of impact, internal forces or a mixture of both. Examples sprains, torn ligament and dislocation.

(More next week on the skeletal system).