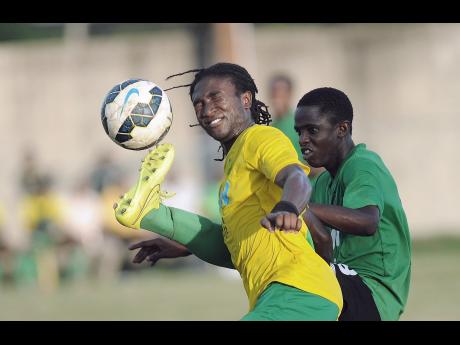 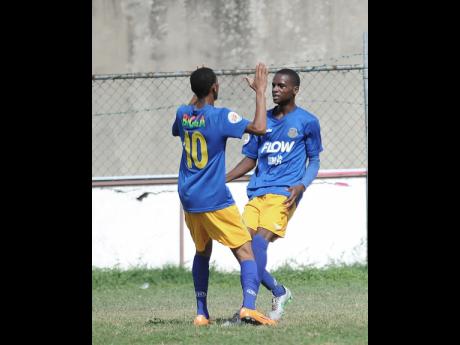 IT'S an outcome few would have imagined at the start of the ISSA-FLOW Manning Cup season, but one of the competition's surprise teams, Jonathan Grant High, sensationally moved within a point of qualifying for the semi-finals from Group K, after outclassing former champions Charlie Smith High 2-0 yesterday at Spanish Town Prison Oval, to lead Group K with six points.

Now, the Spanish Town-based institution needs a mere draw in their final game against Calabar High to advance.

Anelka Grandison sent Jonathan Grant ahead in the 32nd minute with a majestic strike past Charlie's goalkeeper, Eric Robinson.

Tyrone Small put the icing on the cake for Jonathan Grant with another delicate finish, after slipping through Charlie Smith's defence like a ghost to tap in at the 61st.

The goal sent the home supporters into ecstasy, as Jonathan Grant's 12th man, their supporters, were fully in the game.

The Jonathan Grant team only just advanced to the quarter-finals ahead of Norman Manley High after equalising in their eight-minute replay of their final preliminary-round match.

Their only title in the local schoolboy competitions is a Walker Cup triumph in 1999, but they have toppled two former champions so far.

"We got harder fights from other teams, but we planned and prepared for Charlie Smith. We are on six points and still underdogs, and will take it one game at a time," stressed Thomas.

Meanwhile, former champions Excelsior High School returned to winning ways and maintained their hopes of advancing with a 5-1 drubbing of 2005 champions Calabar High in the 3:00 p.m. feature match, also at Prison Oval.

The result leaves Excelsior on three points and second in the group - on goal difference with Charlie Smith - while Calabar are out of the runnings.

"Jonathan Grant has put themselves in the driver's seat. They are in a better position than us, so we just have to do what we have to do and hope for the best," he said.