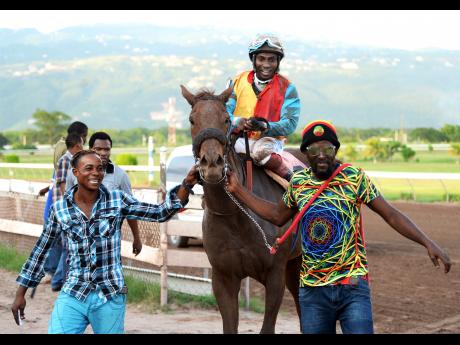 CLASSY three-year-old colt BUZZ NIGHTMARE seeks his fourth consecutive win, in the opening race over 1000 metres (round) for overnight allowance horses at Caymanas Park today, and should have little difficulty in putting away his six opponents.

Trained by 14-time champion Philip Feanny for owners Paul Hoo and Herbie Chong, the fleet-footed BUZZ NIGHTMARE, with Paul 'Country ' Francis in the saddle, is prepping for the 27th running of the Glen Mills Caribbean Sprint Championship over 1200 metres on 'Superday', November 14, and having moved impressively at exercise - galloping five furlongs in 1:00.3 on October 26 - should use this as a stepping stone to much bigger things.

Unraced as a two-year-old, the bay colt by Into Mischief out of Queen of Battle has won four of his five races to date, his only blemish coming in the Prince Consort Guineas Trial on March 22, when finishing fifth to fast-time winner SEMPRE FIDELIS over 1400 metres.

Since then 'BUZZ' has won his three races over sprints in fast times, returning splits of 22.3, 46.0 in winning by 10 lengths over 1100 metres on July 18. He should prove the worst nightmare for his opponents, including recent winner BORDER LINE, who seems best equipped to follow him home.

Another horse expected to extend his winning streak is bang-in-form FORCE DE JOUR, who bids for his sixth consecutive win in the ninth race over 1100 metres for $550000-$500,000 claimers.

The 4-y-o gelding, who now takes orders from veteran trainer Robert Darby Sr, having beaten SUNLIGHT EXPRESS over the straight recently, is fit as ever and with Darby calling up promising 4.0kg claiming apprentice Bebeto Harvey, reducing the weight to 53.0kg, the speedy FORCE DE JOUR ought to be followed in a field of 11.

I also like SIR BIGGS to go one better in the third race over 1820 metres, the well-forward 2-y-o debutante RALLY BABY in the fifth, TECHNOCAT in the sixth and FRANKENSTORM in the seventh over the straight.