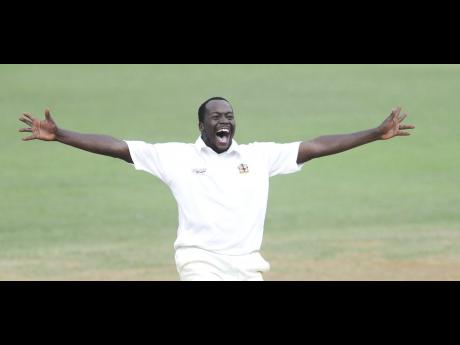 Captain of St Catherine CC Danza Hyatt has pin-pointed experience as the main reason why they were able to beat the University of The West Indies (UWI) in the final of the Jamaica Cricket Association 50-Overs Championship at Sabina Park on Monday.

The final, which represented the first time a competitive day-night national fixture was being played at the venue, saw St Catherine coming away victors by 28 runs.

St Catherine, after winning the toss and electing to take first strike, posted a challenging 261 for seven off their allotted overs, before restricting UWI to 233 with 13 balls remaining.

The Garwaine Johnson-coached St Catherine were claiming the title for the second time in consecutive years, and third overall.

"It was a really good effort by UWI. However, I believe, in the end, the experience of our players pulled us through," remarked Hyatt.

"We lost early wickets when we batted. However, the experience of Gavin (Wallace) and Wayne (Morgan) and later Darnell McCallum gave us very a good total."

Electing to bat on a good track, St Catherine lost their first two wickets with only 15 runs on the board. The wickets were of their two West Indies batsmen, Hyatt and Barbadian Kirk Edwards.

Opener Hyatt was dismissed caught without scoring by fast bowler Christopher Powell, while Edwards was adjudged leg before wicket for four, also off Powell.

However, through opener Shacaya Thomas and Lambert, who put on 45 for for the third wicket before being dislodged for 27 and 25, respectively, the 'Saints' staged a comeback, which was later completed by Wallace, Morgan and McCallum.

Wallace stroked an attractive 41; all-rounder Morgan scored 52; while wicketkeeper McCallum, with a few lofty blows towards the death, ended unbeaten on 53.

Powell finished with two for two for 55.

UWI, in their response, also started shakily, losing the wicket of their influential captain, Paul Palmer Jr, leg before wicket without scoring off the bowling of Brian Buchanan in the third over.

However, thanks to Nicholas Walters (49), Jonathan Solomon (38), Chrishna Graham (31), and Rovman Powell (27), they were able to get themselves within striking distance.

Brown was involved in two controversial incidents on his follow-through and entangling with the batsmen. The last appeared deliberate.

It drew the ire of the crowd after it resulted in Omar Samuels (nine) being run out, with 30 runs needed off 17 balls, and the UWI tail gathering momentum.

Brown ended with three for 42 off 8.5 overs, with off-spinner Pete Salmon, two for 41, and pacer Morgan, two for 42, providing good support.

"Congrats to St Catherine; they played a very good game," conceded Palmer Jr. "We kept on fighting when it mattered. This, however, was our second season; and for us to make the final is a good feat."